ISLAMABAD, Pakistan: The President of Azad Jammu and Kashmir (AJK) Sardar Masood Khan has advised the government of Pakistan to put back Kashmir on the multilateral agenda and must come up with the strategy to respond to the new developments.

While speaking on “Kashmir: A pivot of Indo-Pak Crisis” in a Conference “Enduring Rivalry – Post Indian Election Scenario in Occupied Kashmir” organized by the Center for Global & Strategic Studies (CGSS) at Margala Hotel in Islamabad on Thursday, the AJK president recommended that Pakistan must be made a strong nation strategically and economically.

Masood Khan said that if we fail to become a sound state economically then our struggle for Kashmir will suffer. “We must spend more on our defence and national security. State craft is required to forge national unity in the nation,” he said. 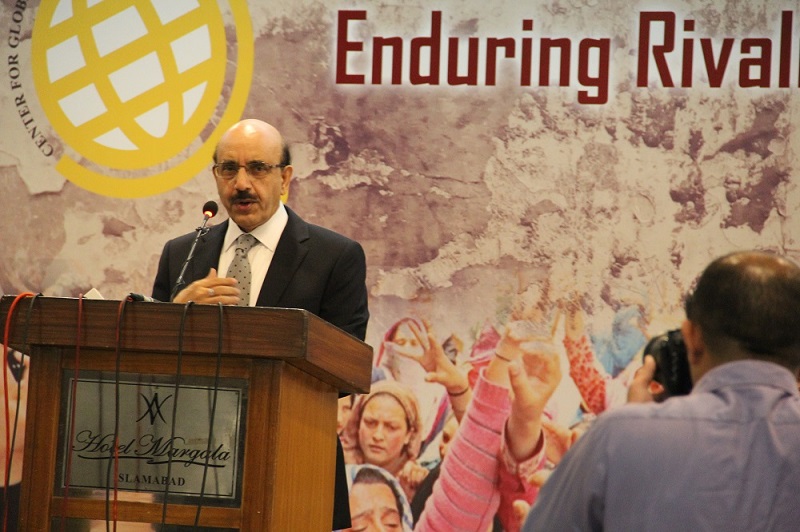 The AJK president said that India does not accept the creation of Pakistan by heart and believes that it was a cardinal sin for which Pakistan must be punished. He said that Indians believe that Pakistan stands in their way of great power status of India. India is targeting Pakistan, Muslims and Kashmiris. The West would tolerate Indian atrocities in Indian Occupied Kashmir (IOK) which is violation of human rights law. Kashmiris are slaves and aliens in their own homeland.

The former High Commissioner of Pakistan to India Abdul Basit said that Pakistan lacks a coherent Kashmir diplomacy. The government is not understanding what dangers lie ahead and it is our own mistakes that has made India to exploit the Kashmir case. The Parliamentary Committee on Kashmir has shown no performance and it will continue. We are not clear on how to deal with the Kashmir issue. Most of the times we are stuck with feasibility instead of long term goals. India is in no hurry and mood to resolve the Kashmir issue and is working on the RSS agenda to trifurcate the Kashmir state. Even the Organization of Islamic Cooperation (OIC) is not ready to stand with us on this issue. We need to inject energy on our Kashmir diplomacy.

Ahmer Bilal Soofi said that we need to invest in our overseas lawyers in order to make this issue towards a positive outcome. We should look over legal diplomacy and bring back Kashmir to the center point where it belongs.

The Social Worker/Hurriyat Leader Mushaal Mullick as a Guest of Honor of the event presented speech on “Kashmir’s Freedom Movement”.

Mushaal Mullick said that there are thousands of persons locked up in jail and it exposes the brutal acts of India. The 70 years long martial law in Kashmir is the world’s longest martial law. Kashmir is being provoked to face war everyday by Indians. Pakistan should take ownership against these human rights violations and we need global support. She urged the participants to raise their voice against the Indian atrocities at every level.

Lieutenant General (retd) Ghulam Mustafa presented his speech on “Geo-strategic Importance of Kashmir: India’s Struggle for Regional Hegemony,” and said that Narendra Modi is coming to power means brutality is coming again with worst conditions and India is going to resolve this issue according to its own benefits.

The Professor at Department of Politics and IR in International Islamic University, Islamabad (IIUI) Dr Muhammad Khan presented his views on “Ethnic cleansing: Victimization of Muslims in Kashmir.” He elaborated about the ethnic cleansing of Kashmiris which dates back to 70 years. He mentioned the UN report of 2018 highlighting the massive human rights violations in Kashmir.

Mati
Mati-Ullah is the Online Editor For DND. He is the real man to handle the team around the Country and get news from them and provide to you instantly.
Share
Facebook
Twitter
Pinterest
WhatsApp
Previous articleArmenia further instable as Pashinyan’s fight with Judiciary continues
Next articleChinese Vice President Wang Qishan to visit Pakistan from May 26-28