The 96-year-old Air Marshal (retd) Asghar Khan passed away at Combined Military Hospital (CMH) in Rawalpindi on Friday after a protracted illness.

Air Marshal (retd) Asghar Khan will be laid to rest with State Honor in his native village of Nawa Shehar in Abbottabad.

In recognition of patriotic services and great contribution in building the Pakistan Air Force into one of the best air forces in the World, the prime minister on Friday approved the State Funeral for former Air Marshal Asghar Khan. 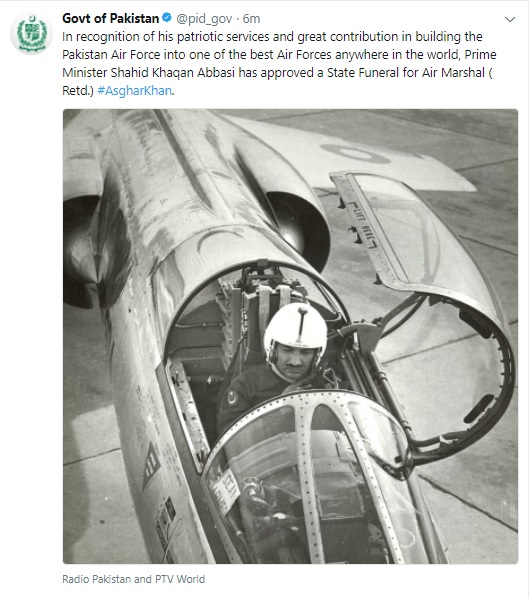 Asghar Khan was the first native Commander-in-Chief of the Pakistan Air Force. The PAF Academy Risalpur was named after Asghar Khan in March 2017.

The former three-star rank general Asghar Khan retired from PAF in July 1965. Later he also entered into politics and founded the Tehrik-e-Istiqlal in 970. He was also an aviation historian and peace activist.

Paying tribute to his services for the Country, the prime minister prayed for eternal peace of the departed soul and grant of courage to the bereaved family to bear this irreparable loss with fortitude.

The Air Chief said that with his leadership qualities, Air Marshal (retd) Asghar Khan played a constructive and vital role in turning PAF into a modern air force.

While expressing his grief on sad demise of Air Marshal (retd) Asghar Khan, the Chief of Army Staff (COAS) General Qamar Javed Bajwa said that “An iconic soldier who will be remembered for his historic contributions for laying foundations of a strong Pakistan Air Force. May Allah bless his soul-Ameen.”

The Chairman Pakistan Tehreek-e-Insaf (PTI) Imran Khan also said that “Saddened to learn of Air Chief Marshal Asghar Khan’s death early this morning. He transformed the PAF and was a man of steadfast principles and integrity. My prayers and condolences go to his family.”

Mati
Mati-Ullah is the Online Editor For DND. He is the real man to handle the team around the Country and get news from them and provide to you instantly.
Share
Facebook
Twitter
Pinterest
WhatsApp
Previous articleZubaida Aapa passes away, political leaders grieved over her death
Next articleUzbekistan to launch Electronic Visa Issuance System