Aima Baig Under Fire For Cheating On Shahbaz Shigri 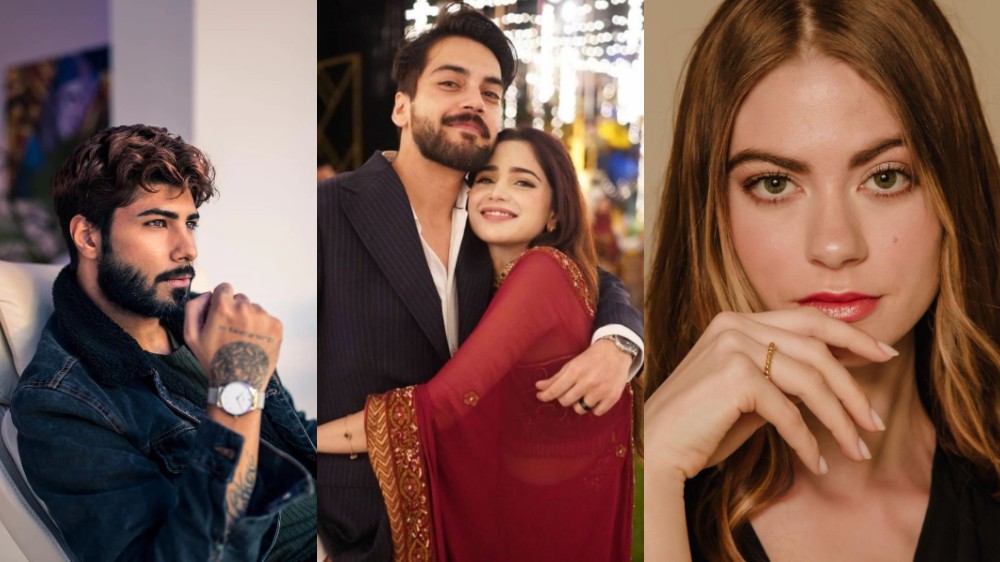 Aima Baig is under-trolling by the whole internet community since a scandalous rumour started floating about her. Aima Baig and Shahbaz Shigri officially got separated and she called off her engagement to him. After calling off the engagement, she did not give any reason and Shahbaz remained silent over the matter.

Aima is definitely the most famous and well-liked female singer in Pakistan right now. She has taken over most of the OSTs, film songs and concerts. However, this recent turn in her life has made her more famous for all the wrong reasons. People are accusing her since a British model has come to a front against her. There are also accusations that Aima is dating Qes Ahmad, a filmmaker. The controversy seems never-ending because it is on Twitter’s trending list. Netizens are also hurling memes about this issue and trolling Aima.

Recently, Aima Baig took to her official Instagram account and wrote a note to her fans to announce the end of her engagement. She also left a note not to send her any ‘sorry texts’ because she was happy in her life. She deleted all pictures with Shahbaz Shigri but did not tell an actual reason. Shahbaz also remained silent. It led the fans to speculate about the reason.

The surprise came to end. A British model, Taloulah Mair has put some serious allegations of cheating on Aima Baig. She took to her Instagram and created a story against her in which she called her ‘one of the most famous women in Pakistan’.

Taloulah accused that our famous Pakistani singer is dating her ex-boyfriend, Qes Ahmad. She claimed that Qes Ahmad, a UK-based Pakistani filmmaker was the reason why Aima has ended her engagement. According to her, Qes himself admitted to dating one of the most famous women in Pakistan while bragging about his relationship in front of Taloulah. She also accused Aima to pay for a flat in Dubai where she and Qes stayed.

According to the British model, Qes was a scam who had done fraud with her. She claimed that he stole one thousand pounds from her along with cheating on her. She also revealed that Aima Baig was engaged to Shahbaz Shigri while all this affair was going on. To prove evidence, she also showed screenshots of a conversation with Shahbaz. Here’s the proof: 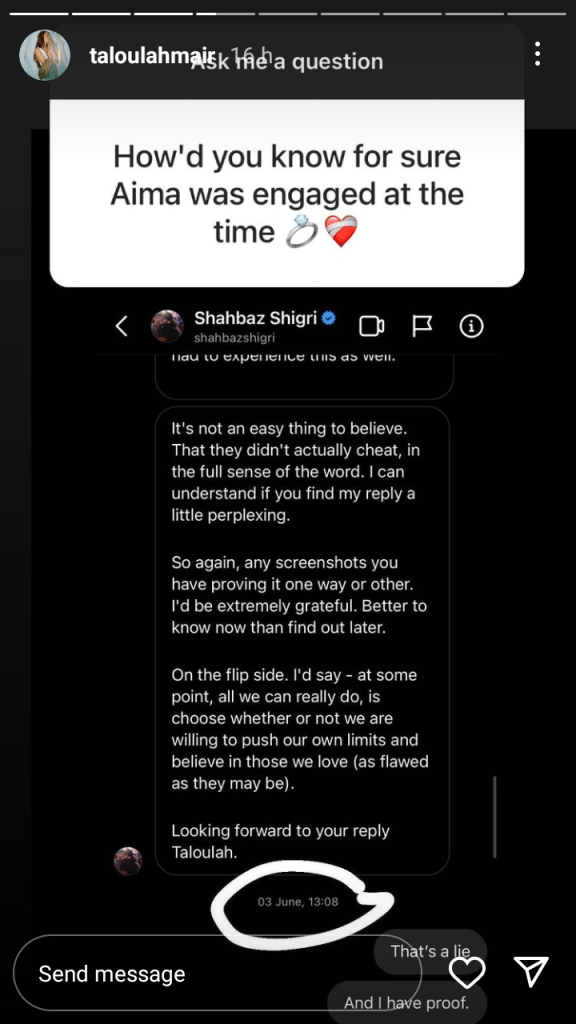 Talaoulah did not come without any evidence. She had done all her homework of exposing her ex-boyfriend and Aima Baig. She revealed a picture of a chat between Aima and Qes Ahmad that proves her wrong. 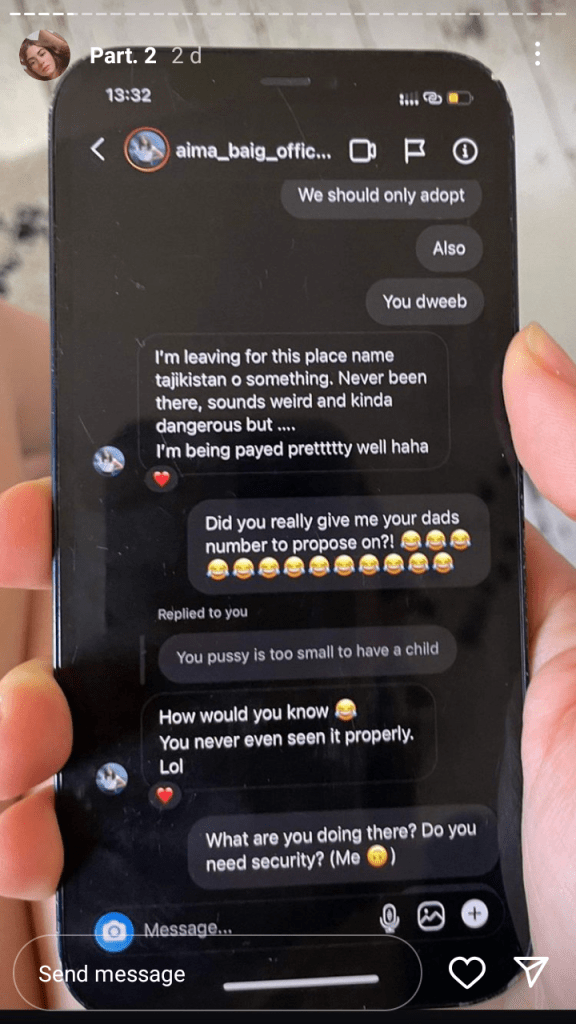 To this story and the drama that caught fire, Qes replied using his Instagram account. He wrote a long paragraph in which he denied accusations of cheating or stealing from Taloulah. He accused her back of cheating on him and stealing those 1000 pounds from him. Also, he mentioned that she was creating all this drama because she was unemployed. It is important to note here that he did not mention Aima Baig even once.

It would have just gone by as a flinch if Aima had not intervened. The famous Pakistani singer tried to call Taloulah multiple times and she posted those screenshots on Instagram as well.  When she did not respond to the calls, Aima tried to block her account which was successfully done. So, the UK model is using her photography account to share her stories and the real side of Aima with the public.

She also posted a video of a call between her and Aima which was also heard by Qes Ahmad too. During the call, Aima accused Qes of being a rapist to which Qes quickly responded. He immediately backlashed her for accusing her of that. He got angry at her for calling him a rapist.

The whole internet is reacting differently to this scandal. Some are supporting their favourite singer from this accusation. while there are other people, who are criticising her for breaking her engagement. They are also making hilarious memes. Here are a few. 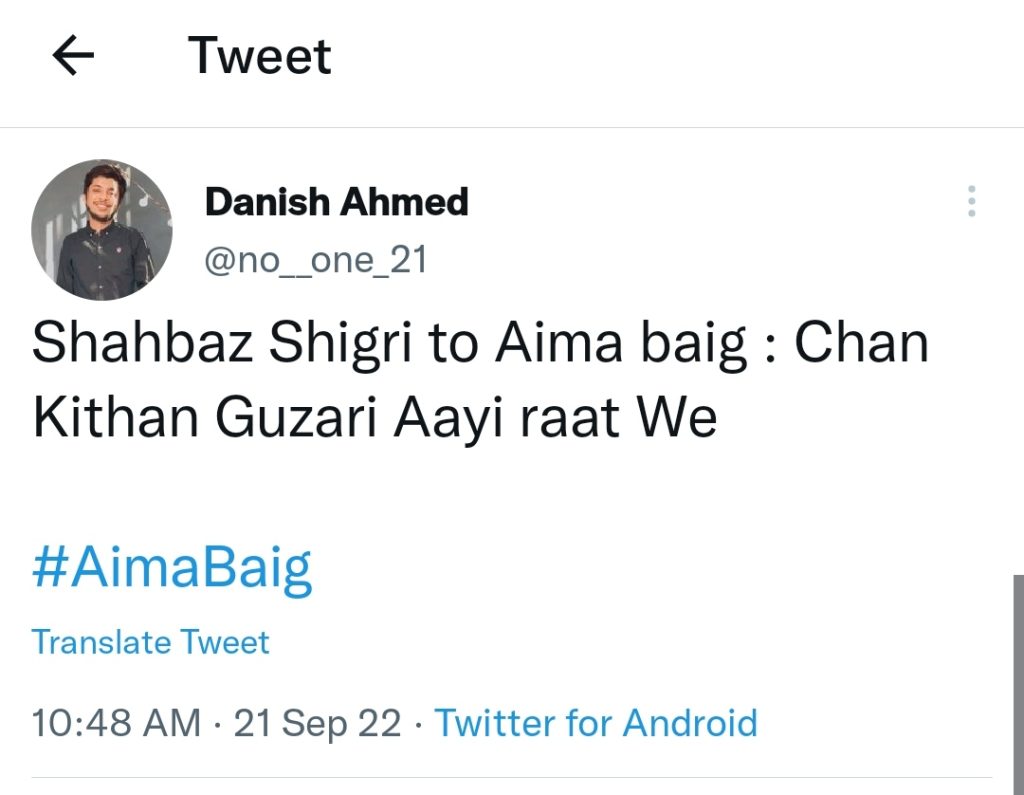 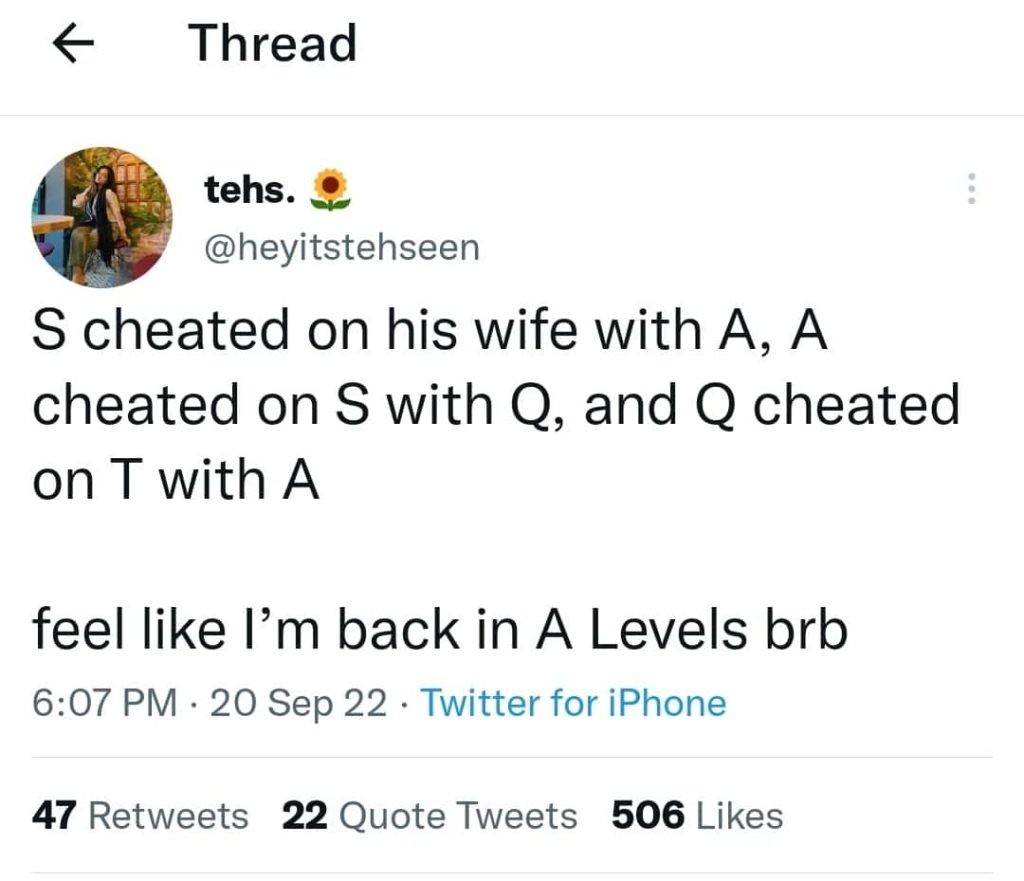 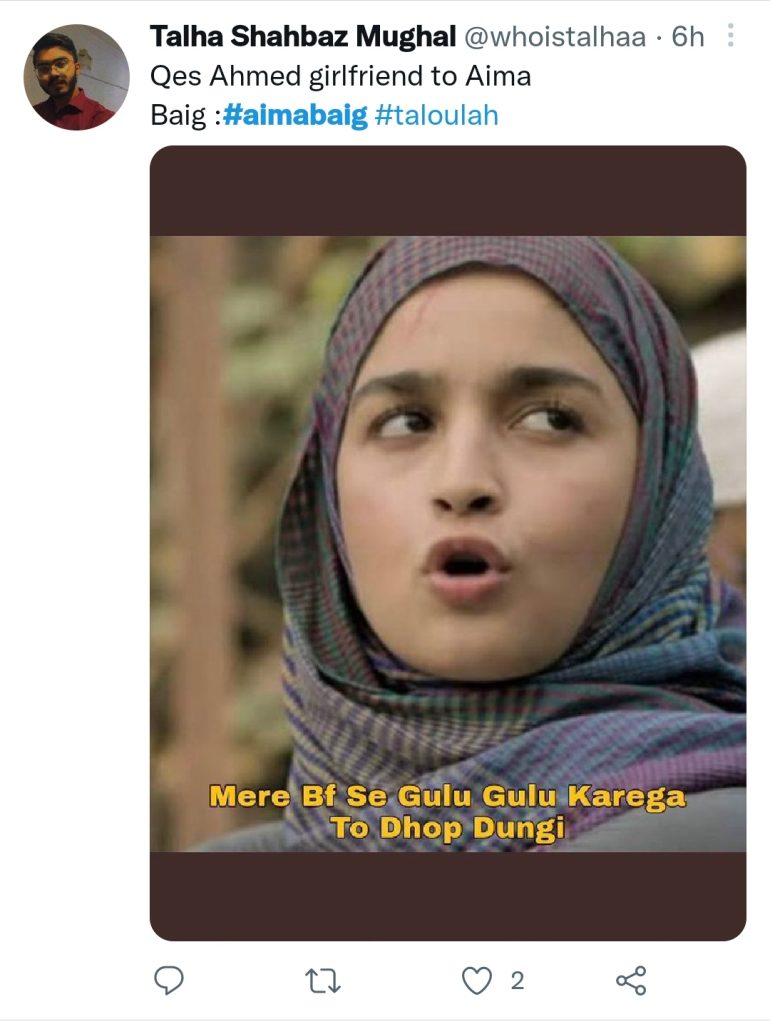 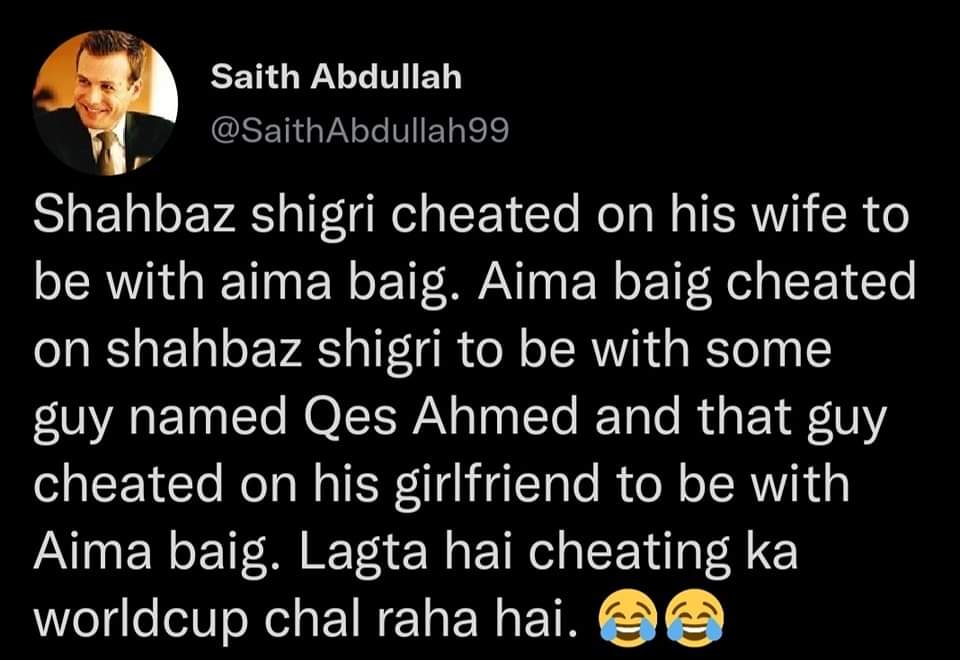 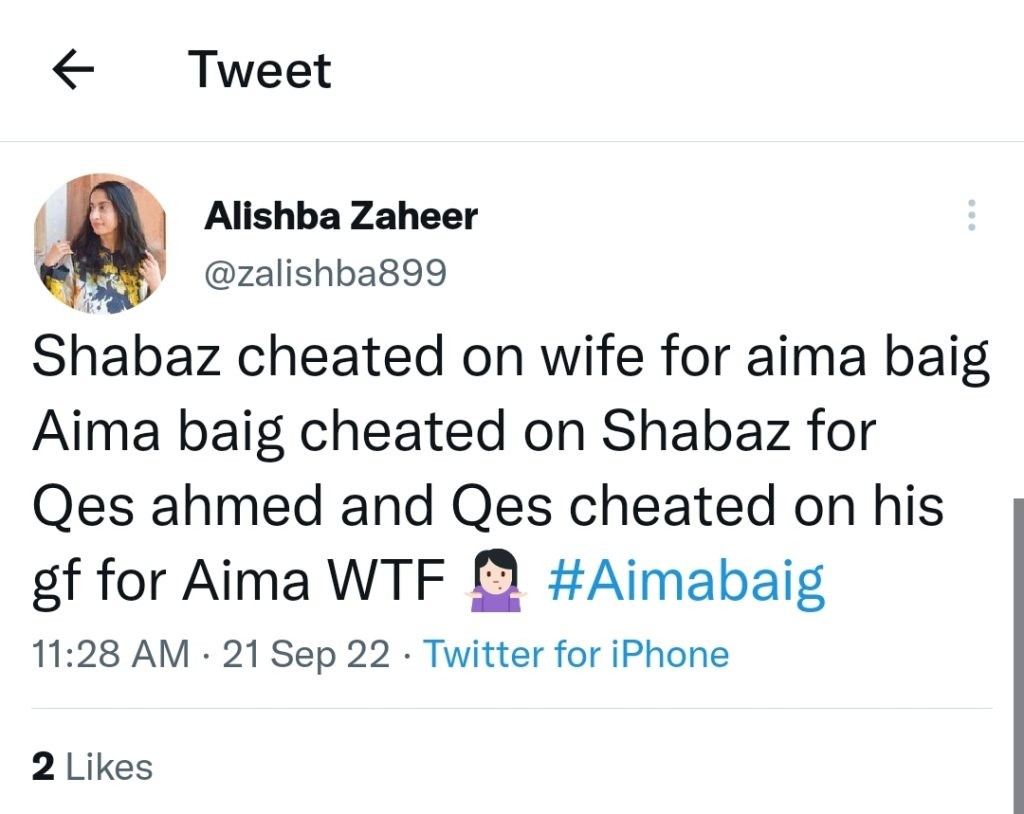 Duaa Naeem
Duaa Naeem is a fresh graduate who is utilizing her writing skills into writing articles that are informative for the readers.
Share
Facebook
Twitter
Pinterest
WhatsApp
Previous articleBangladesh Promotes Military Diplomacy in the Indo-Pacific
Next articleJournalists demand probe who ordered state repression against them during PTI rule