A notification to this regard was issued on Monday from the Addition Secretary General PTI Arshad Dad. 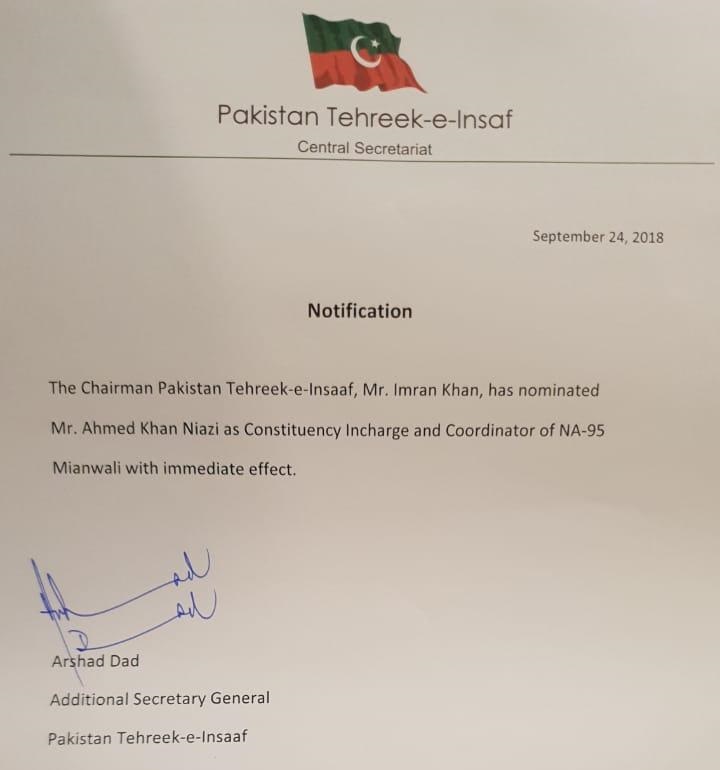 Besides Mianwali, Imran Khan also succeeded from NA-35 Bannu, NA-53 Islamabad-II, NA-95 Mianwali-I, NA-131 Lahore-XI, and NA-243 Karachi East-II in 2018 general elections; however, as per his earlier announcement, he retained his native Constituency seat from Mianwali.

The by-elections on rest of seats left by Imran Khan along with seven other National Assembly Constituencies will be held on October 14.

The Chairman PTI also became the member of the National Assembly in 2002 from the first time from the then NA-71 Mianwali-I Constituency by bagging 66,737 votes. His rival Haji Obaid Ullah Khan of Pakistan Muslim League (PML) secured 60,533 votes, falling short of 6,204 votes from Imran Khan.

Mati
Mati-Ullah is the Online Editor For DND. He is the real man to handle the team around the Country and get news from them and provide to you instantly.
Share
Facebook
Twitter
Pinterest
WhatsApp
Previous articleCouncil of Common Interests Meeting deliberates on seven-point agenda
Next articleEgyptian ambassador assures increase in Quota for Pakistani students in Jamia Al-Azhar