After Afghanistan, no country has a greater stake in its peace than Pakistan

Monitoring Desk:  “After Afghanistan itself, no country has a greater stake in its peace and stability than Pakistan”.

This is commented by Pakistani ambassador to the United States Dr. Asad Majeed Khan in his opinion published by the Washington Post. 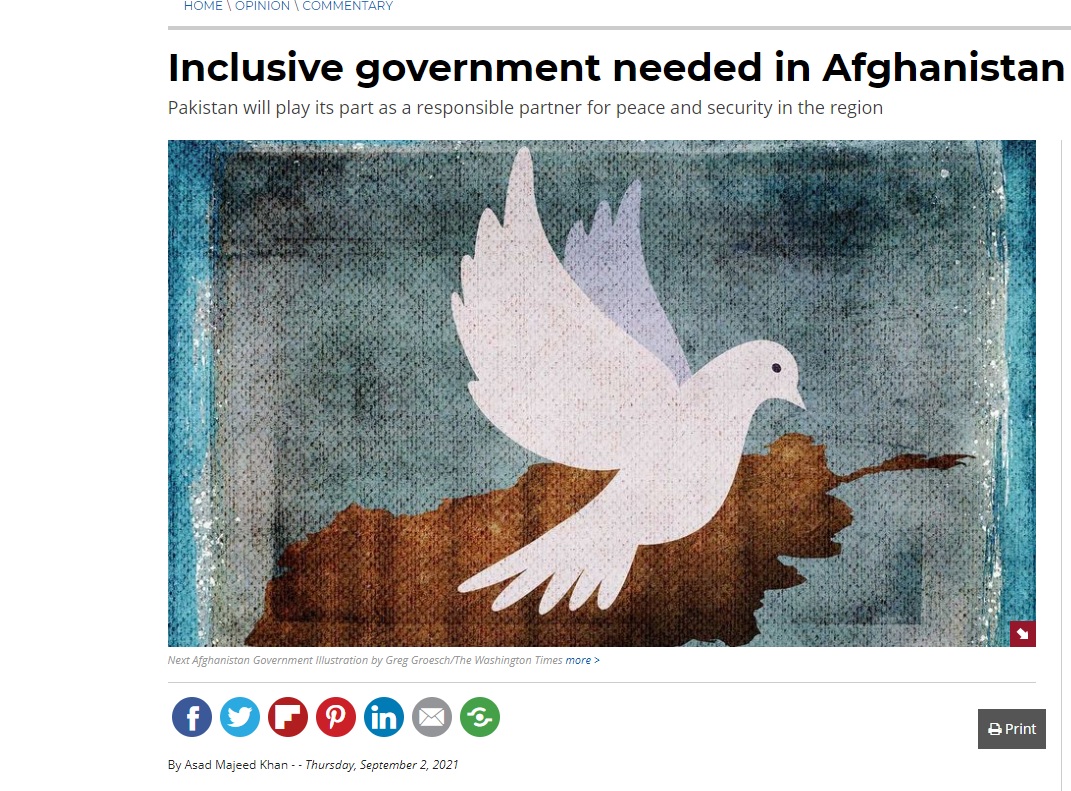 His Opinion is reproduced hereunder:

The end of the U.S. military presence in Afghanistan should mark, as Secretary of State Antony Blinken said, the beginning of “a new diplomatic mission” for achieving peace.

Pakistan and the United States retain the same interests in Afghanistan — the formation of an inclusive government that reflects Afghanistan’s ethnic and sectarian diversity and preserves the country’s gains in advancing human rights and women’s access to education. Most importantly, neither of our countries wants to see Afghanistan become a sanctuary for terrorist groups ever again.

After Afghanistan itself, no country has a greater stake in its peace and stability than Pakistan. We are a developing country that already hosts over 3 million Afghan refugees. Blowback from the 40-year-long conflict in Afghanistan has taken 80,000 Pakistani lives and caused direct losses of at least $150 billion to our economy.

We cannot sustain a fresh influx of Afghan refugees that more instability in our western neighbor would trigger. More importantly, we are worried that an unstable Afghanistan would offer a more permissive environment to terrorist groups – ranging from Al Qaeda and ISIS-K to the Tehreek-e-Taliban Pakistan and Baloch insurgents – that Pakistan had pushed out in some of recent history’s most successful counterterrorism operations. The horrific terrorist attacks against U.S. security forces and the Afghan people at Kabul airport last week were a grim reminder of the threat that these groups continue to pose.

Ever since President Biden announced his decision to withdraw all U.S. troops from Afghanistan in April, Pakistan had been calling for more vigorous international diplomacy in support of an inclusive peace agreement in Afghanistan. We warned that failure to achieve such an outcome could cause serious regional instability and even precipitate civil war. Pakistan joined the United States, Russia, and China to explicitly oppose any effort to impose a government by force in Afghanistan. In vain, we urged the Taliban and the Ghani government to reduce violence and show flexibility.

While the Taliban made gains on the ground, the erstwhile Afghan government was busy inciting hatred against Pakistan on social media. In the end, President Ghani and his cohorts simply deserted the Afghan people. Their flight could have caused an even worse breakdown of order when a more orderly transition may still have been achieved.

As both Prime Minister Khan and President Biden have pointed out, continuing the war would not have changed the outcome – the speed of the Ghani regime’s collapse is proof of that.

A negotiated, inclusive settlement between the Taliban and the other Afghan factions is the only plausible pathway to sustainable peace in Afghanistan. An Afghan government formed as the result of such a settlement would be a credible security and development partner for the international community. Any government imposed by force would be internally unstable and externally destabilizing.

This is why Pakistan continues to support all efforts for securing a negotiated settlement. We recently brought together a large and diverse group of Afghan political leaders — including many members of the former Northern Alliance — to make another effort towards reaching a common understanding of Afghanistan’s future.

Meanwhile, Pakistan provided critical support for the now-completed multinational evacuation effort from Kabul airport. Pakistan’s embassy in Kabul is still functioning. Our doors and borders are open for Afghan people, who still look to Pakistan as their first shelter in moments of distress. Pakistan will continue to facilitate Americans, Afghans, and other foreigners wanting to leave Afghanistan.

While the situation in Afghanistan remains tenuous, the fact that our worst fears haven’t come true is some cause for hope. Afghanistan is largely calm, and the specter of a protracted civil war has receded for now. Cities like Kabul and Jalalabad have been spared a repeat of the brutal, street-to-street fighting that reduced them to rubble in the 1990s. There has been no panicked rush of Afghan refugees at our borders. Critically, the Taliban have shown some receptivity to the international community’s concerns about human rights, women’s education, and the importance of sharing power. We hope their actions match their words.

We are convinced that investing in an inclusive government in Afghanistan remains the international community’s best counter-terrorism investment. Pakistan will play its part as a responsible partner for peace and security in Afghanistan.

While the war in Afghanistan may be over, the peace is yet to be won.