LAHORE, Pakistan: The data collected by the Centre for Social Justice (CSJ) shows that the abuse of blasphemy laws increased exponentially in Pakistan in 2020.

At least 1,855 persons have been alleged under the offenses related to religion, mostly under Sections 295 B, C to 298 C, of the Pakistan Penal Code known as blasphemy laws from 1987 to 2020.

Whilst the highest number of accused (200) were reported in the year 2020. Of them, 75% of accused were Muslims while the largest number of victims (70%) belonged to the Shia sect, during this year.

The trend had changed from Muslims complainant accusing non-Muslims to Muslims bringing allegations against Muslims though it would be wrong to assume that any minority sect or religious identity had become immune to abuse.

The trend is also indicative of the deepening sectarian divide and the rise of abuse of religion however faulty legislation is still a Damocles’ sword on the citizens of Pakistan.

In the cumulative picture, since 1987, Punjab experienced the highest ratio of abuse of law and religion i.e. 76% followed by 19% in Sindh.

The prisons in Punjab housed 337 inmates in 2020 which included those under trial and convicted, Lahore district jail had the highest number of accused (60).

At least 78 persons had been killed extra-judicially after allegations related to blasphemy and apostasy, 42 of whom were Muslims, 23 Christians, 9 Ahmadis, 2 Hindus, and 2 persons whose religious identity could not be ascertained.

Although the killing of Hazara, Ahmadis, and Shia is attributed to terrorism, nevertheless, the concept of blasphemy is frequently and openly used for fund-raising, hate-mongering, and indoctrination for cadres building of the violent outfits.

In his remarks, the Executive Director of CSJ Peter Jacob said “These statistics depict Pakistan as a place where abuse of blasphemy is highest in the world. The law is frequently used to inflict despicable and multiple human rights violations, including physical violence, losses of property and livelihood, evictions, and even loss of life. It is not only the accused but sometimes the entire family and community which undergo the suffering after allegations are leveled.”

“The government needs to pay serious attention to the drivers of religious intolerance,” Peter Jacob remarked.

Abuse of blasphemy laws in Pakistan over the years 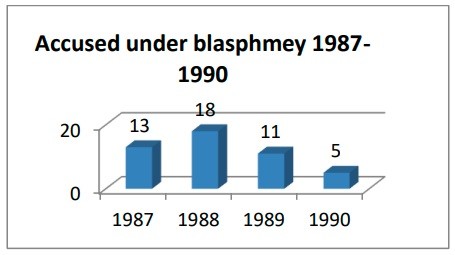 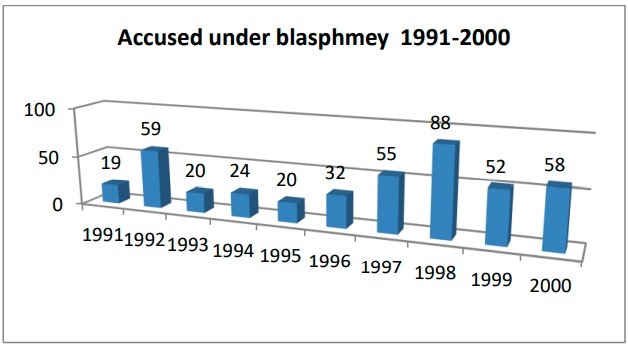 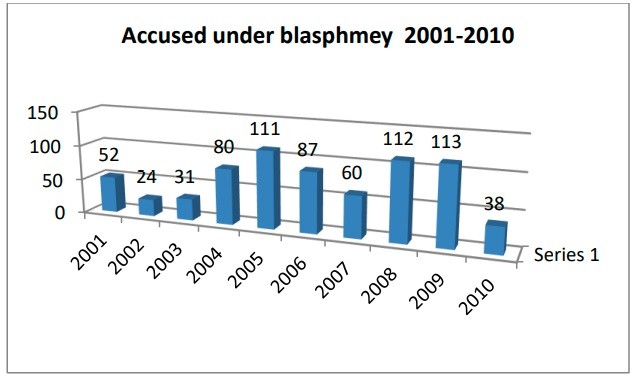 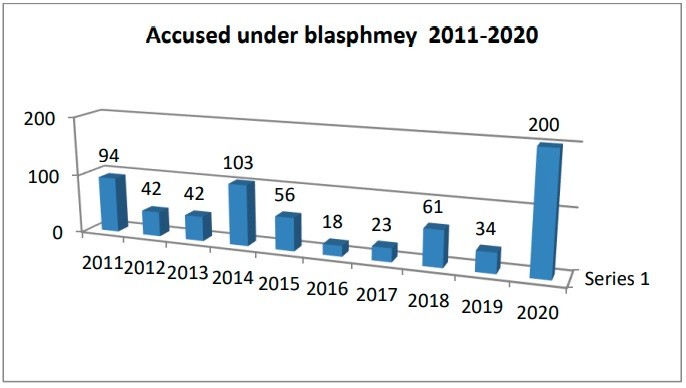 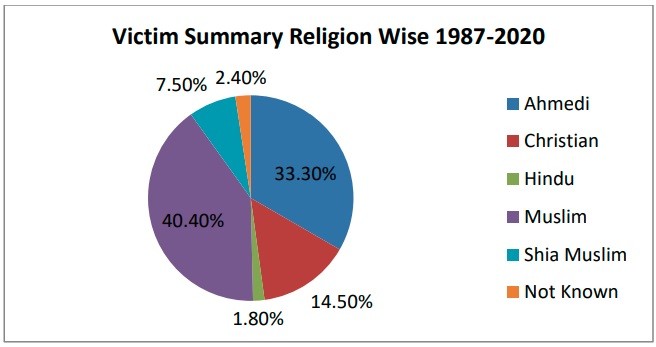 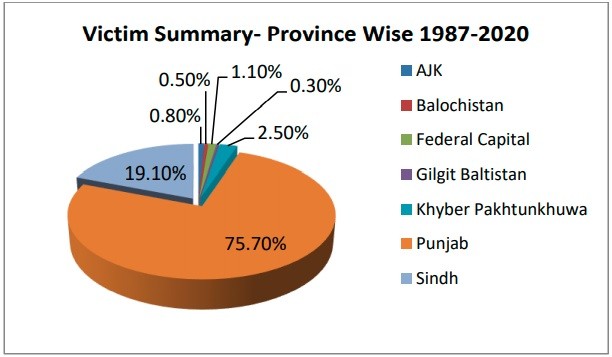 Explanation Note: Due to the limitations regarding data collections and verification, the CSJ presents a minimal data of persons accused under blasphemy laws collected from credible sources.

The exact number of victims can be higher than presented here which includes formal charges as well as allegations because the latter involves similar threat some time.

The number of Muslims victims is larger than non-Muslims, which is due to the overwhelming population of Muslim population (96%). Nevertheless, it is not an evidence of fairness of the law or its enforcement.

On the contrary the minorities appear to be the disproportionally affected by the law. It was observed that most of the cases involving Muslim victims get resolved at the investigation stage whereas if a non-Muslim victim usually faces a trial that ends on conviction.