ISLAMABAD, Pakistan: The Minister for Religious Affairs and Interfaith Harmony Noor-ul-Haq Qadri has said that about 200,000 pilgrims will perform Hajj in 2020 under the Government as well as Private Hajj Scheme.

However, the exact number of pilgrims who will perform Hajj in 2020 will be known after the signing of an agreement by him with his Saudi Counterpart, which is expected in the first week of December 2019.

In a written reply to a question submitted in the National Assembly on December 9, 2019, the religious affairs minister told that the detail of per head expenditure for Hajj 2020 is based on the rates of accommodation charges.

The minister told that compulsory Hajj dues, additional service charges and train charges etc. to be provided by the Director General (DG) Hajj, Jeddah and airfare to be decided with the airlines.

Noor-ul-Haq Qadri further told that the survey of the buildings is underway and agreements with the different departments of the Kingdom of Saudi Arabia are also under process. Therefore, the estimated expenditure is yet to be determined.

Besides, the Minister for Religious Affairs and Interfaith Harmony Noor-ul-Haq Qadri also shared the following data with the House;

Year-wise number of persons applied for Hajj under the government scheme along with the amount of Hajj dues for the last five years; 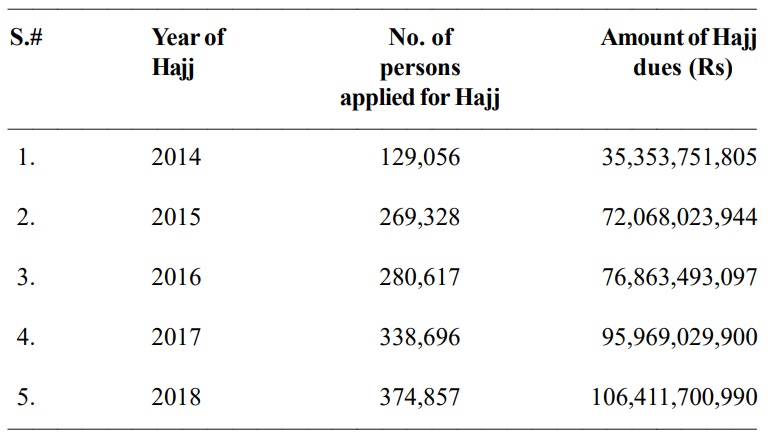 Year-wise amount of interest deposited by the banks on retention of Hajj dues of successful applicants;

The amount of profit/interest is spent on the welfare activities of pilgrims such as purchase of vaccine for Hujjaj, training of Hujjaj, procurement of medicine for Hujjaj (other than vaccine) and Media campaign through Print and Electronic Media and printing of Hajj material and budgetary allocation to the Directorate General of Hajj, Jeddah and Directorate of Hajj in Pakistan etc.

Hajj dues in respect of successful pilgrims are received from the banks according to the Memorandum of Understanding (MoU) signed with them. The Hajj dues are refunded to the unsuccessful applicants immediately after ballot by the banks.

Year-wise break-up of Income and expenditure;

Mati
Mati-Ullah is the Online Editor For DND. He is the real man to handle the team around the Country and get news from them and provide to you instantly.
Share
Facebook
Twitter
Pinterest
WhatsApp
Previous articlePakistan’s population growth rate highest among neighboring Countries
Next articleJazzCash monthly active subscribers cross 7 million