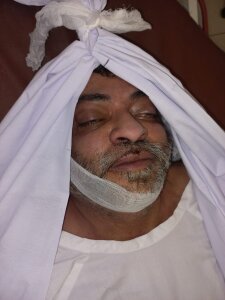 Sources said that Aamir Liaquat Hussain was found dead at his residence in Karachi’s Khudad Colony whereas some media reports suggested that his health deteriorated and he was shifted to the Aga Khan University Hospital where he was declared dead.

His servant told the media that Dr. Aamir’s health worsen in the morning, therefore; he fell unconscious.

The SSP East Syed Abdul Rahim Sherazi told the media that the cause of his death will be ascertained after his post-mortem examination. He told that they received the information about Dr. Aamir at 1:00 pm and he was found dead.

Dr. Aamir Liaquat Hussain was also a well-renowned TV host and in 2018 general elections, he won from the Constituency NA-245 (Karachi East-IV) and became a member of the National Assembly on PTI’s ticket.


Previously, he also served as the Minister of State for Religious Affairs from 2004 to 2007 after he won the National Assembly seat in 2002 general elections from NA-249 (Karachi-XI) on Muttahida Qaumi Movement’s (MQM) ticket.

The 50-year-old Dr. Aamir also hosted Ramadan transmissions for Suhur and Iftar for many years; however, his most famous religious program was ‘Aalim Online’ on Geo TV.

His name also has been listed three times in The 500 influential Muslims worldwide.

However, his life from various aspects has always been under controversies. Recently, he remained under immense mental stress after his third wife Syeda Dania Shah left him accusing him of subjecting her to violence.

In an interview, Hussain said he received his Bachelor of Medicine, Bachelor of Surgery (MBBS) degree from Liaquat Medical College Jamshoro in 1995, and Doctor of Philosophy (PhD) in Islamic Studies in 2002 by a now known degree mill, Trinity College and University (based in Spain but incorporated in Dover, Delaware). He has also said that he gained a degree of Master of Arts in Islamic Studies in 2002 from the Trinity College and University.

In 2006, the Higher Education Commission of Pakistan declared the BA degree in Islamic Studies of Hussain obtained from Trinity College and University as not recognized and fake. In 2003, The Guardian reported this university as a scam where one could buy a degree for as cheaply as £150 within 28 days. The University of Karachi declared his BA degree as fake earlier in 2005. Hussain declared his BA degree to the election commission of Pakistan while filing his nomination forms for the 2002 Pakistani general elections. It was reported that Hussain had purchased his degrees from Trinity College and University to become eligible for contesting the elections. In 2002, it was made compulsory for contestants of elections for seats in the Provincial and National Assemblies of Pakistan to hold at least a bachelor’s degree.

Hussain’s claim to have received an MBBS degree from Liaquat Medical College Jamshoro in 1995 was also falsified based on the fact that if he did have one, he would not need any fake bachelors, masters or doctorate degrees to contest the 2002 general elections. It was also noted that one cannot study at two different faculties at a same time since Hussain claimed to have both his MBBS degree in 1995 and BA in Islamic Studies from Trinity College in 1995.

In 2012, it was reported that Hussain appeared as a candidate for a Bachelor of Arts degree at the University of Karachi from where he graduated in 2008. He was later enrolled in Federal Urdu University of Arts, Science & Technology in 2010 from where he received his master’s degree in Islamic Studies but according to officials there, Hussain never attended a class or sat any exams. The officials said that the admission form of Hussain was initially submitted with the photograph of another person and was later replaced with the photograph of Hussain. It was also reported that Hussain did not himself sit the semester exams.

In 2015, it was reported that Hussain had acquired a fake degree from Ashwood University.