A shot in the dark

“Ambassador Masood Khan is not going to replace President Biden or Secretary Blinken. Therefore, those optimists who expect him to single-handedly persuade New Delhi to reverse its actions of August 5, 2019, through his diplomatic skills or compel India to agree on holding the promised plebiscite surely do not appreciate a Pakistani diplomat’s limitations particularly in the US, wherein arranging a phone call has become a herculean task”.

This was expressed by former Ambassador Najm us Saqib in his column “A shot in the dark” published in daily the Nation Islamabad. He questioned the trend of hiring retired officials for filling prime stations and indicates that the new trend brings not-so-good news for the serving or aspiring members of the Foreign Service. “Preferring old and retired competent hands over-energetic and capable senior serving officers must have added salt to the wounds already inflicted on the morale of the Foreign Service,” he commented.

Hereunder is his full article published in daily the Nation 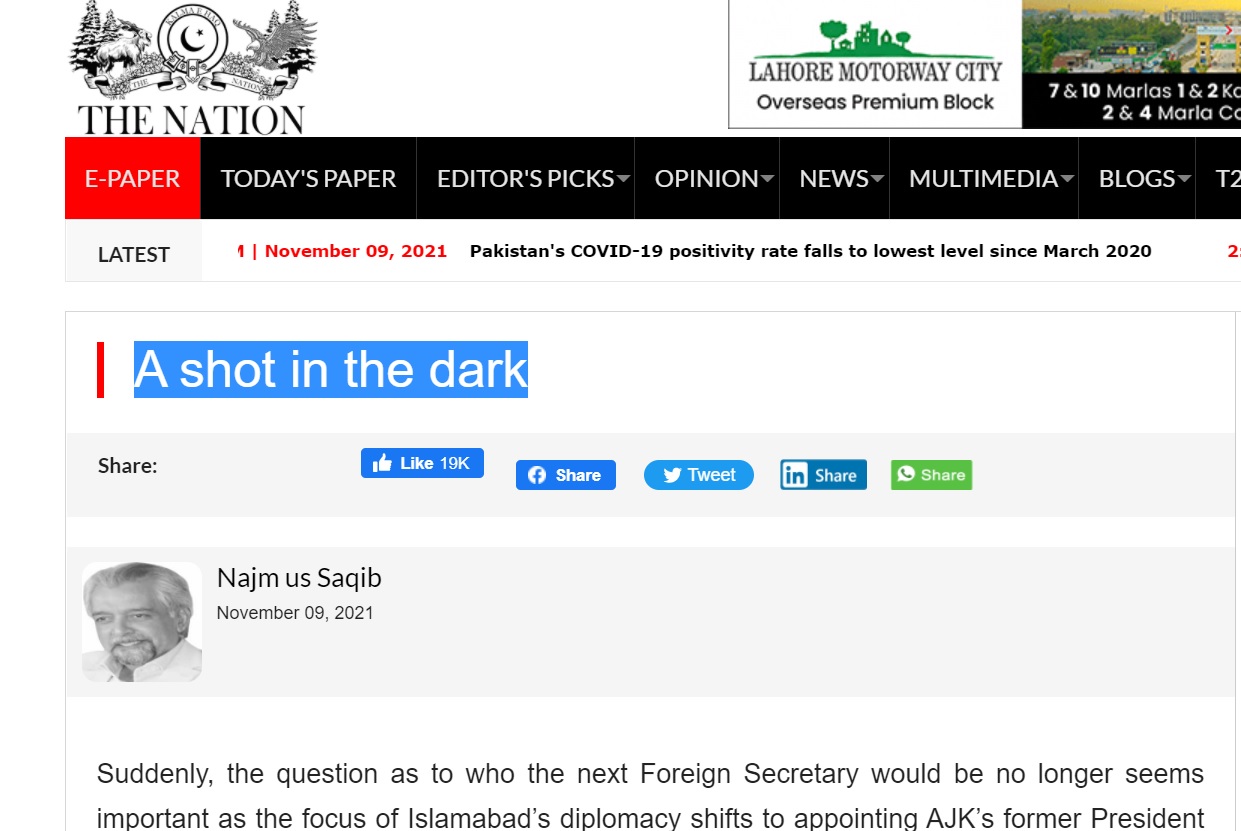 Suddenly, the question as to who the next Foreign Secretary would be no longer seems important as the focus of Islamabad’s diplomacy shifts to appointing AJK’s former President as its new Ambassador to Washington. For obvious reasons, the move has raised a number of questions and eyebrows in Islamabad. It was not clear whether the relevant summary to the PM had contained a panel of three possible candidates for the post or if only one name was proposed for approval or perhaps the Foreign Office was asked to send a routine summary to that effect after the decision had already been taken.

It was also not clear if the reason for this change had anything to do with the not-so-impressive performance of the incumbent Ambassador. Clarity was also needed on the criteria used for selecting the envoy for one of the most sought after key stations and that too in such haste.

The move was unprecedented in the sense that never in the history of Pakistan, has a former AJK President ever been considered to fill an ambassadorial slot. In any case, considering the designated Ambassador’s known experience in multilateral diplomacy, the move should have landed him in New York instead of Washington.

Is it business as usual or does this trend setting move form part of Islamabad’s recent announcement of floating a new foreign policy narrative?

No one seems to be interested in the story behind the decision or how and why the other two horses running for the post were overlooked. In an ambiance of disarrayed postings and transfers, merit, eligibility and competence have quietly been overtaken by the principles of expediency.

Nevertheless, a couple of deductions could be made particularly on the message that Islamabad might have desired to convey to Washington and New Delhi. The message is: Although Afghanistan and its humanitarian crisis, economic recovery, boosting exports, counterterrorism and security issues are immediate concerns for Pakistan, Kashmir still figures at the top of Pakistan’s foreign policy agenda.

Another message to the US might be in the context of posting of Donald Blome as America’s new Ambassador to Pakistan. Perhaps, a heavyweight diplomat was needed to be posted to Washington to match the credentials of his American counterpart. The timing of this change also needs to be factored in if one was interested in knowing one of the real reasons for this ‘out-of-the-blue’ posting.

Sending veteran ambassadors like Munir Akram and Masood Khan to New York and Washington after years of their retirement, certainly shows the government’s confidence in the immense diplomatic prowess that certain oldies undoubtedly possess in safeguarding the interests of Pakistan in the world of diplomacy. The discussion on credentials, age, present health conditions or the availability of better options aside, being the Chief Executive, the Prime Minister has the prerogative to send any living, sane, adult, Muslim Pakistani as his envoy to any capital of the world.

Besides fulfilling these criteria, Ambassadors Akram and Khan have a wealth of experience in the related field to qualify for occupying the aforesaid coveted posts. In fact, the new trend set by the government should be welcomed by all those retired 70-plus diplomats who might fancy taking another shot at an ambassadorial posting.

Not only has such a trend generated extreme anger and frustration but it also alludes to the lack of confidence shown by the Executives with regard to the ‘appalling credentials’ of all senior serving officers of the Foreign Office. The worrisome absence of suitable career diplomats for certain key positions from within the present stock of officers also raises serious concerns about the potential and capabilities of all and sundry who are serving abroad or at headquarters particularly in higher grades. One wonders if anyone is interested in mustering up some sense of pride in joining or remaining in the once most prestigious service group in Pakistan.

It must be clarified here that Ambassador Masood Khan is not going to replace President Biden or Secretary Blinken. Therefore, those optimists who expect him to single-handedly persuade New Delhi to reverse its actions of August 5, 2019 through his diplomatic skills or compel India to agree on holding the promised plebiscite surely do not appreciate a Pakistani diplomat’s limitations particularly in the US, wherein arranging a phone call has become a herculean task.

Similarly, those who presume that a change at the ambassadorial level will soon bring the Pak-US trajectory back to where it was in President Ayub’s era are either unaware of the ground realities or have no other option but to keep hoping against hope. Even the intended message highlighting the importance of Kashmir for Pakistan is likely to fall flat in its face as apparently no one in the US even cares who represents Pakistan in Washington.

A strong Pakistani diplomatic team in the US can at best put across Islamabad’s standpoints in a comparatively improved manner by drafting befitting briefs and recommending lucid talking points in grammatically correct English language.

Ambassadors are not magicians. Any major change in Pak-India, Pak-US relations or for that matter in the status of IIOJ&K must not be expected from an envoy, whose primary job is to convey his government’s policies to the host government through his interlocutors and send the responses thereof to Islamabad.

Under the present South Asian environment especially after the Taliban takeover of Afghanistan and looking at the closed doors of the White House, one may expect Ambassador Khan’s role to be more of a defensive and explanatory nature. Comparable to aggressive, trade- and economic-orientated diplomacy, damage-limitation and reducing the alarming and hurting trust deficit between the two countries must be his main occupation.

Note: The writer is a former Ambassador of Pakistan and author of seven books in three languages. He can be reached at najmussaqib1960@msn.com