A letter from Dalit student Rohith Vemula to UNESCO

On January 17, 2016, a dead body was found in University of Hyderabad India. Dead body was of a Voice — A voice for Dalits. Leader of Ambedkar Students Association Rohith Vemula who was forced to commit suicide.
He was not the first or the last Dalit student who was murdered but he was first who left “told stories” in a world where Dalit are murdered with “untold stories”.
Police believe that he had committed suicide while his friends and students of university believe that it was a “systematic murder” and an “engineered suicide” because he was so marginalized and compelled by circumstances developed by university administration around him that he might have committed suicide. However, majority of his close friends believe he could not commit suicide and case needs deep investigation. This case was stored in cold-storage of Indian legal system.
According to his close friends he was one of the activists on hunger strike from January 16 on the campus against the illegal and demonstrably false case framed against them by the administration.
Rohith went out of the tent to a hostel and hanged himself, leaving a suicide note. It was at the behest of BJP leader Bandaru Datttreya who started persecuting Dalit students and scholars.
There are several Dalit who were either denied higher education or were dumped in Unemployment lot after receiving higher education. This is the fate of low-caste people in India but such treatment of humans by Indian society never gets attention of international media which sees India with a different lenses—lenses of a country having huge economy and high trade linkages with western and middle eastern countries.
Rohith was the man of action while most of the rest of low-caste Hindus are either taking a break or retired. Political paradigm on central universities in Hindutva persecutes who talk about discrimination against Muslims and worked to bring Dalits and Muslims together to combat it.
Rohith so-called suicide note exposes those facts which are hidden behind heavy curtains Indian media and establishment throw on the eyes of international Right Organisations and foreign media.
251-days lockdown in Indian Occupied Kashmir is another fact which is not seen by the world. Whatever happened in Delhi massacre recently and what was happened in Jamia and NJU universities is forgotten.
Let us have a look to letter Rohith left to know how Indian establishment persecutes Muslims and Dalits.

Here is his Letter:

Good morning,
I would not be around when you read this letter. Don’t get angry on me. I know some of you truly cared for me, loved me and treated me very well. I have no complaints on anyone. It was always with myself I had problems. I feel a growing gap between my soul and my body. And I have become a monster. I always wanted to be a writer. A writer of science, like Carl Sagan. At last, this is the only letter I am getting to write.
I loved Science, Stars, Nature, but then I loved people without knowing that people have long since divorced from nature. Our feelings are second handed. Our love is constructed. Our beliefs colored. Our originality valid through artificial art. It has become truly difficult to love without getting hurt.
The value of a man was reduced to his immediate identity and nearest possibility. To a vote. To a number. To a thing. Never was a man treated as a mind. As a glorious thing made up of star dust. In very field, in studies, in streets, in politics, and in dying and living.

I am writing this kind of letter for the first time. My first time of a final letter. Forgive me if I fail to make sense.
My birth is my fatal accident. I can never recover from my childhood loneliness. The unappreciated child from my past.
May be I was wrong, all the while, in understanding world. In understanding love, pain, life, death. There was no urgency. But I always was rushing. Desperate to start a life. All the while, some people, for them, life itself is curse.
I am not hurt at this moment. I am not sad. I am just empty. Unconcerned about myself. That’s pathetic. And that’s why I am doing this.
People may dub me as a coward. And selfish, or stupid once I am gone. I am not bothered about what I am called. I don’t believe in after-death stories, ghosts, or spirits. If there is anything at all I believe, I believe that I can travel to the stars. And know about the other worlds.

If you, who is reading this letter can do anything for me, I have to get 7 months of my fellowship, one lakh and seventy-five thousand rupees. Please see to it that my family is paid that. I have to give some 40 thousand to Ramji. He never asked them back. But please pay that to him from that.
Let my funeral be silent and smooth. Behave like I just appeared and gone. Do not shed tears for me. Know that I am happy dead than being alive.

“From shadows to the stars.”

To ASA family, sorry for disappointing all of you. You loved me very much. I wish all the very best for the future.

For one last time, 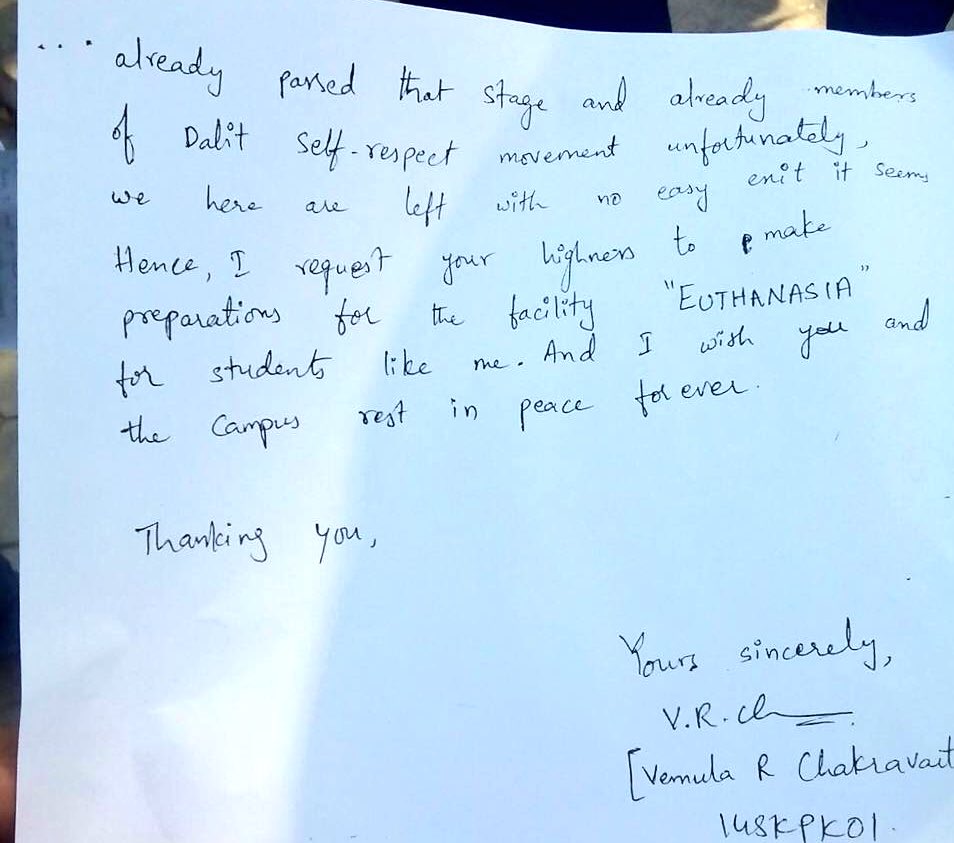 Would you like to read another letter which is sent by Rohith from the world he lives now? Let me share this letter with you also:

I was never a coward. I was follower of Ambedkar and I was a Comrade.
I was grown up from a poor background, in a home at Savitribhai Nagar in Guntur where my mother brought me up by tailoring, which she continued till I got admission in Ph.D. I did not get admission in Ph.D in one attempt. I was hurdled to get PhD admission twice just because of the oppressive attitudes of bureaucracy and brahminical mindsets of a few, even while having an exceptional double JRF in hand. I knew brahminical mindsets would not allow me to get degree and I was ready to sacrifice my life because I know I have to sacrifice for those Dalits and Muslims who have dreams in their eyes. Will India be a normal country? I am going but you who love me have to work hard—stand against BJP kind of mindset otherwise this country would become hell for 1.25 billion people including high caste Hindus also because hate never allows anybody to flourish—irrespective of his caste, colour and social background.
I felt pain when my mother was dragged in Delhi but media kept silent.
My mother went to India Gate to pay respects to me (Rohith), in a candle light procession. She was dragged by the police and later detained by the Delhi police along with others. The news was barely covered by the mainstream media. One wonders why such a serious incident was looked over by the media when my mother was being humiliated?
My mother wants to ask you (Nation) why did me and other Dalit students got branded as an anti-national in the first place?
Do we (Dalits and low-caste Hindus and Muslims have no right on education? If yes, why we are not allowed higher education?
I want to ask authorities of United Nations Educational, Scientific and Cultural Organization (UNESCO) that you are responsible for equal rights for education to all and believe that you work for filling gaps between poor and rich, between powerful and powerless but you do not see what India does to its poor strata of society?
Did you write any letter to Indian authorities on my systematic murder? Did you ask Indian education system why I and thousands like me are persecute in Indian educational system? I know you did not write and you will not because India is a strong economy and UN stands for India always—from Kashmir issue to Assam and from Assam to Manipur.
I give a damn to all of you— You UN or UNESCO. You stand only for powerful and crush powerless people. Thank you for reading my letter.
Jai Bheem