A journey to the Land of Stepan Bandera

Being a student of “Political Philosophy”, I have special interest in “Resistance Movements” of Indian subcontinent and the Europe.

Let me explain here that a resistance movement is an organized effort by some portion of the civil population of a country/region/area to withstand the established government or an occupying power and to disrupt civil order and stability.

In many cases, a resistance movement may employ both violent and non-violent methods. Being a student of history, I believe that mainstream Resistance movements were against “Imperialism” or against the process of Empire-building.

The history of Indian subcontinent witnessed several such movements against Empire-building and traces of such resistances are found even during the Vedic era (1500 BCE to 500 BCE) in northern India on both sides of the Indus River. The story goes on and then we found classical resistance against Mughal Empire and then also against British Empire.

History of Indian subcontinent remembers people like Tipu Sultan, Jansi Ki Rani and many more for sacrificing their lives and their families in quest to contest expansionism, colonialization and empire-building of British Raj.

People who resist Imperialism are called traitors by oppressors and rulers while they are heroes of oppressed class. Heroes of Indian subcontinent like Hyder Ali and his son Tipu Sultan are icons of resistance against Imperialism and their fight ended when Tipu Sultan was martyred in 1799. After his death, Indian subcontinent lost its independence to British Colonization for the next 148 years.

The recent example in Indo-Pak subcontinent of such mixed feelings is hero of Indian occupied Kashmir Valley — Burhan Muzafar Wani.

Burhan Wani was martyred in Kashmir by Indian forces because he wanted a free land which is under Indian occupation. Burhan Wani is a Hero for Kashmiri youth while Indian government considers him terrorist.

Indian subcontinent tried to defend its independence through various Franco-Indian alliances in an attempt to oust expanding Britain Raj from the Indian subcontinent. Tipu Sultan tried to motivate Napoleon to make a junction with India to mitigate British Empire. The political philosophy behind such alliances was based on a popular narrative of “Enemy of an enemy is our friend” and we see that the same political narrative was popular almost everywhere in Europe and Africa against British Raj, empire-building of Imperialist Russia and formation of Soviet Union.

“The story of resistance against Russian Imperialism and Communism” was part of my syllabus and I read about a personality namely “Stepan Bandera” while my stay in Government College Lahore Philosophy Department during 1982-89.

We had bad information flow about regions under the then iron curtain of former Soviet Union. However, one of our teacher who studied in Germany had good knowledge about resistance of Bandera to free his motherland from Polish and Russian occupations.

The Organization of Ukrainian Nationalists (OUN) in 1930s fought against Polish and Russians and collaborated with German forces in a quest to free Ukraine by using the political philosophy of “Enemy of an enemy is our friend”. However, Nazi Germany betrayed OUN and purged several members of OUN including family members of Bandera and killed his brothers because Banderas wanted an independent Western Ukraine.

Born in 1909 in western Ukraine, which was at that time under Polish rule, Bandera became the leader of the Organization of Ukrainian Nationalists (OUN) in the 1930s. In the face of Polish colonial rule in the west and Soviet aggression in the east, Bandera was well aware that the unification and independence of Ukraine would be impossible unless he was able to find a powerful foreign ally.

In the 1930s, the only foreign power he could turn to for help was the then expanding Nazi Germany. The outbreak of the World War II and the subsequent German invasion of Poland and then the Soviet Union presented Bandera with a once-in-a-lifetime opportunity to realize his dream of creating a unified and independent Ukraine.

After the Wehrmacht had invaded the Soviet Union and conquered the entire Ukraine in June 1941, the Nazis approached Bandera and the OUN and pledged to help the Ukrainian people achieve secession from the Soviet Union but the honeymoon period between Bandera and the Nazis didn’t last long, as the latter were getting increasingly concerned about the potential threat posed by the escalating Ukrainian nationalist movement. 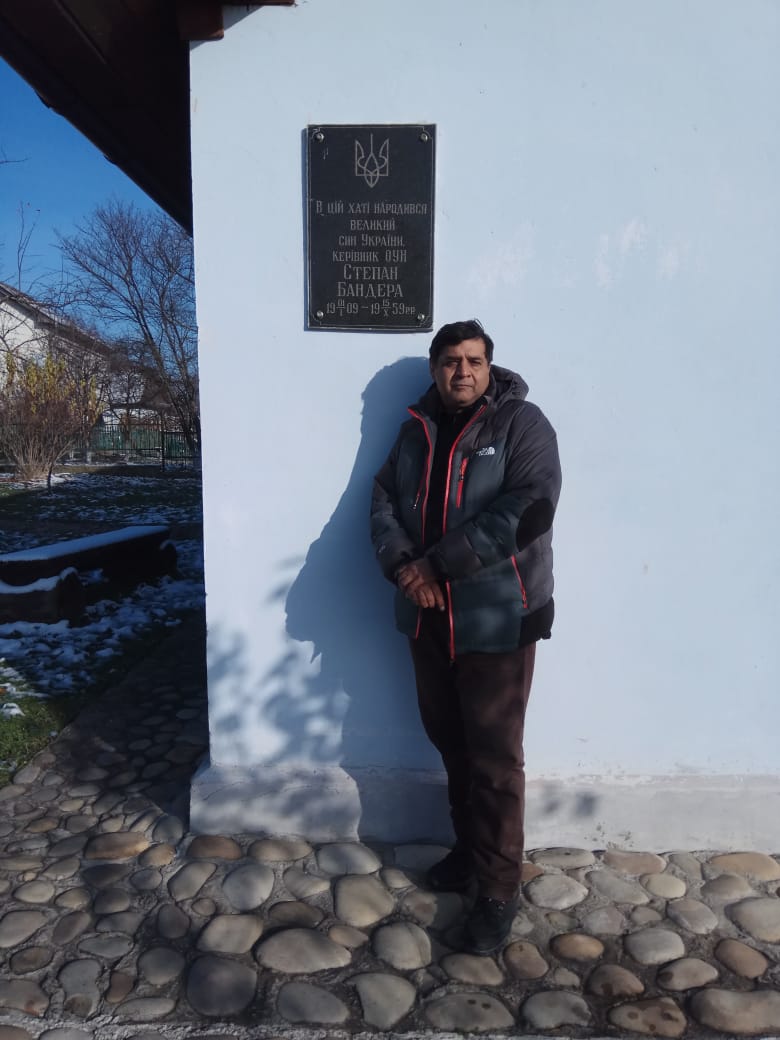 In late 1941, the Nazis began to mount a massive crackdown on the OUN and other Ukrainian nationalists. The hope of an Independent Ukraine was lost for Bandera when Germany lost WWII and former Soviet Union established its rule over entire Ukraine. Bandera remained in Germany where he was poisoned by cyanide gas and killed on October 15, 1959 in Munich allegedly by KGB operator.

I had a strong urge to visit the land of Bandera when I was a student but it was impossible because former USSR was virtually an out of bound land for citizens of Pakistan.

My desire kept alive and fulfilled on November 24, 2018 when I reached the village of Bandera in Ivano-Frankivsk region of Ukraine. Travelling from Ivano-Frankivsk to Old Ugrinov (Uhryniv Staryi) via Novitsa Village Road, I had a strong desire to touch the soil of freedom fighter who sacrificed his whole family for his motherland but he still needs recognition he really deserves.

“Bandera I know Freedom is Not Free.  I know freedom fighters are unusual people who have courage to “Think and Execute” unusually. Bandera I am at your doorstep, please accept my visit to your land—-A land of unusual people”.