In a reply to a question by the Jamaat-e-Islami’s Senator Mushtaq Ahmed, the Minister for Interior Ijaz Ahmed Shah told the Senate on Wednesday that the Provincial Home Departments have frozen the properties of proscribed organizations under the United Nations Security Council (Freezing and Seizure) Order, 2019 issued by the Ministry of Foreign Affairs.

The minister noted that the freezing is carried out against the UN-designated entities.

Ijaz Ahmed Shah also shared the details with the Senate of frozen accounts of some madrassas (religious seminaries) by the government under the National Action Plan (NAP).

Likewise, 57 properties owned by JeM including 53 madaris/mosques, 2 dispensaries, and 2 ambulances have been frozen.

The details of properties as per organization are as under:— 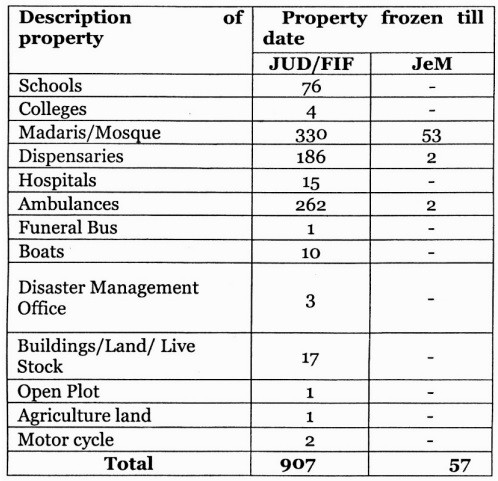 The minister also shared the province-wise breakup of the frozen property of the proscribed organizations.

The province-wise data says that 611 properties owned by JuD and FIF were frozen in Punjab, 80 in Sindh, 108 in Khyber Pakhtunkhwa (KPK), 30 in Balochistan, 17 in Islamabad Capital Territory (ICT), and 61 in Azad Jammu and Kashmir (AJK).

The House was further apprised that 8 properties of JeM were frozen in Punjab, 3 in Sindh, 29 in KPK, 1 in Balochistan, 4 in ICT, and 12 in AJK.

The province-wise breakup is as under:—

Mati
Mati-Ullah is the Online Editor For DND. He is the real man to handle the team around the Country and get news from them and provide to you instantly.
Share
Facebook
Twitter
Pinterest
WhatsApp
Previous article‘Jalan’ Escapes Ban – Drama to Go On-air As Per Schedule!
Next articleIndia losing credibility at int’l forums for its aggressive posturing: FM Qureshi