84 organizations and 6,337 persons banned in Pakistan at present, NA told

ISLAMABAD, Pakistan: The Minister for Interior Ijaz Ahmad Shah told the National Assembly on Friday that a total of 84 organizations and 6,337 persons are at present banned in Pakistan.

In reply to another question by Nafeesa Inayatullah Khan Khattak of Pakistan Tehreek-e-Insaf (PTI), the interior minister declined the notion that Pakistan is observing a growing number of organ trafficking for the last many years.

Ijaz Shah said that the data received from Field Zones of the Federal Investigation Agency (FIA) does not support the observation that the illegal organ trafficking cases are growing in the Country.

The minister said that a total of seven organ trafficking cases were registered during the last three years (2017, 2018 & 2019) whereas 37 accused persons were arrested in those cases. He told that since the cases are under trial, no punishment has been awarded so far.

Number of organ trafficking cases registered by FIA during the last six years; 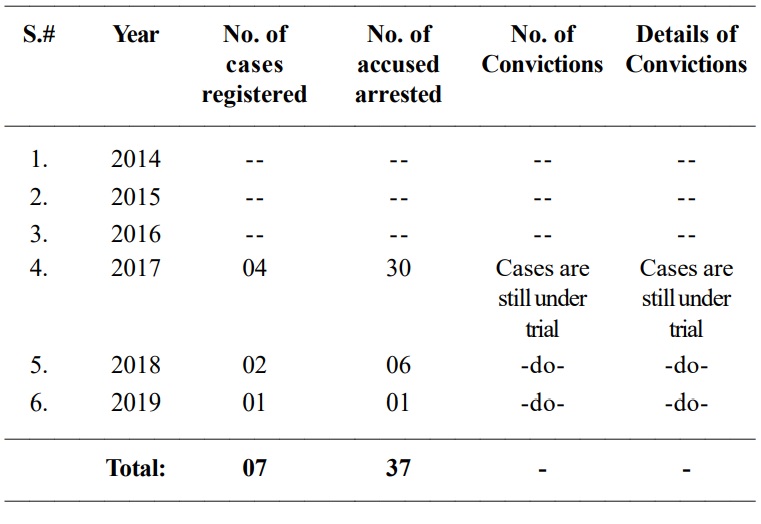 Separately, replying to a question asked by PTI’s Zille Huma about the substandard food being served in most of food points in Twin Cities especially in Hostels, Mess and Public Restaurants, the minister told that the Islamabad Capital Territory (ICT) administration have imposed heavy fines of Rs 33,70,100 to 670 food points particularly Mess of Hostels and Public Restaurants of ICT for sub-standard and poor hygiene and they have been strictly warned to improve quality of food being served.

The interior minister further told that the legislation in this regard is under process in the Parliament under the Bill “The Islamabad Capital Territory Food Safety Bill, 2019.”

Mati
Mati-Ullah is the Online Editor For DND. He is the real man to handle the team around the Country and get news from them and provide to you instantly.
Share
Facebook
Twitter
Pinterest
WhatsApp
Previous articlePM Imran Khan directs roadmap to promote IT Sector
Next article47,036,318 persons possess passports in Pakistan at present