A retired Lt General in his latest article wrote that 2022 was an arduous year — perhaps one of the worst in Pakistani history. Yes, he is truly right if we watch events with military lookout because the reputation of the military is now under question after so many people spilled so many beans including the former COAS Gen (retd) Qamar Bajwa about what the military had been doing with Pakistan by manipulating domestic events through political engineering. Whatever Gen (retd) Qamar Bajwa had said about the role of the army in Pakistani politics was already known by the majority of people but now the facts sheet had been stamped by a former military chief.

The year 2022 was a blessing for the country except for floods that destroyed over 33 percent agricultural land of Pakistan since almost everybody is exposed by everybody who was hand in glove just before April 2022.

Everyone who has an interest in politics and in the history of Pakistan knows what the Army Generals had been doing with this country since the first assembly was sent home and the first martial law was clamped. By defeating Māder-e Millat (Mother of the Nation) who was a sister of Quaid e Azam—the Father of the nation in the Presidential elections of 1965, the military understood that everything could be achieved with the stick that every army chief carries in his hands.

There is nothing new about what Imran Khan has been claiming and accusing the army for. Since Imran Khan was granted the status of ‘Sadiq’ and ‘Ameen’ (honest and righteous) by the Supreme Court of Pakistan therefore his allegations against Gen (retd) Bajwa and his team for planning to kill Imran are a serious issue and must be addressed. Khan also claimed that he wanted to snub corruption in Pakistan but the former Chief always stopped his (Imran’s) attempts to eliminate corruption. While former COAS is blaming Khan for the economic meltdown the country is facing today. I believe both ex-partners are spilling half-truths (although there is no such thing as a half-truth if we talk about the philosophical theory of truth) and half-truth still lies inside them. Both are washing dirty linen in public and God knows for how long they would continue this practice.  At least any of them should share who was behind granting the status of ‘Sadiq’ and ‘Ameen’ to Imran.


Former Prime Minister Imran Khan had not contested some of his audio leaks including one with a lady from Kalabagh district. This alleged audio leak tells us what kind of man was chosen for making a Riyasat-i-Madina in Pakistan. Benefactors and the beneficiary are throwing filth on each other’s faces and politicians who are painted as corrupt, illiterate, and incompetent are enjoying reading tales of alleged corruption and moral bankruptcy of “larger than life and stronger than state” elements.

I believe Project Imran was a disaster for the country but the closure of this project has become a disaster for those who consider they are always right and know every situation better than anybody. Gen Ayub used to say that he knew how to handle bloody politicians and then he had to resign when the student movement put him inside his guarded Army House. Once Gen (retd) Yahya Khan claimed in his interview with a foreign journalist that he knew the realities of former East Pakistan as clearly as he knew his palm. within four months after this interview, Dhaka fell like a house of cards. Gen Ziaul Haq used to consider himself the best friend of the United States in south Asia and then his C-130 was blown in the air still facts are under thick fog who was behind this mango bust but the country is still facing the burden of radicalization he injected into the society and now his crafted Mujahedeen had given birth to their third generation in the form of TTP. Gen (retd) Musharraf was also known for his over-confidence and he used to say he was running  Pakistan better than anybody could run. Now he cannot live in Pakistan as he is a fugitive in many court cases but his gift of terrorism is still strangulating the country.

In one of my previous articles I already mentioned that the political history of Pakistan is full of allegations and events; indicating how chiefs of the Pakistan Army were allegedly involved in political engineering and stealing elections. Madr-e-Millat (Mother of the Nation) Fatima Jinnah lost the 1965 elections against the then Chief of Pakistan Army Ayub Khan through post-election rigging and manipulation of the electoral college and Gen Ayub Khan got himself elected as the President of Pakistan.

After 1965, Pakistan went for elections in 1970. These elections were the first general elections held in Pakistan (East and West Pakistan) on an adult franchise basis. One person One vote power was too strong for the Establishment to get results of its choice. Awami League of Sheikh Mujibur Rahman emerged as the majority. He was the same man who supported Fatima Jinnah against Ayub Khan in the 1965 election and served as chief election officer of Fatima Jinnah in East Pakistan. Mujib was arrested two weeks before the election, charged with sedition, and jailed for a year by Gen Ayub Khan.

West-Pakistan-centric establishment headed by Gen Yahya Khan was not ready to transfer power to East-Pakistan-centric Awami League and then a series of events resulted in the Fall of Dhaka. Supplementary Hamoodur Rahman Commission Report is the best available document that tells what happened actually in 1970-71. Its primary conclusion was very critical of the role of Pakistan’s military interference in politics, the misconduct of politicians as well as the intelligence failures which permitted the infiltration of Indian agents all along the borders of East Pakistan. In 2000, some parts of the Report were leaked to Indian and Pakistani newspapers. After the leaks, the government decided to public Supplementary Report therefore the original report is still in the files of “Top Secret”.

After the Fall of Dhaka, the next general elections took place in 1977 which were followed by the clamping of 11 yearlong Martial Law of Gen Ziaul Haq who held a referendum on 19 December 1984, and voters were asked whether they supported Zia-ul-Haq’s proposals for amending several laws in accordance with the Quran and Sunnah, whether they wanted this process to continue, and whether they supported the Islamic ideology of Pakistan. Official results declared it was approved by 98.5% of voters, with a turnout of 62.2%. Ziaul Haq held 1985 Party-less elections to legitimize his rule and became President through the then Parliament which had no political party sitting on the floor of the House.

Next Party-based General Elections were held in Pakistan on 16 November 1988 after the death of Ziaul Haq and the Pakistan People’s Party (PPP), led by the late Benazir Bhutto won 94 of the 207 seats in the National Assembly. Her government survived only two years and she was deposed by then-President Ghulam Ishaq Khan and the country went for another general election in 1990. Islami Jamhoori Ittihad (IJI) (Islamic Democratic Alliance) was formed to defeat Benazir Bhutto and the decision of the Asghar Khan case in Supreme Court briefs readers how the then Chief of Army Staff of Pakistan Army General Mirza Aslam Beg formed and used IJI to steal votes for Mian Nawaz Sharif?

Between 1990 to 2018, the country documented political Ping-Pong, and Nawaz Sharif, Benazir Bhutto, and her party were sent home sometimes through the 8th amendment, sometimes through courts, and once through a corporate–sector kind of Martial Law because Gen (retd) Musharraf did not like the word “Martial Law Administrator” so he coined diction “Chief Executive” of the country.

There was also nothing new in General Elections 2018 and allegations of stealing election through pre-poll maneuverability and engineering, polling day rigging and post-election RTS fiasco raised several questions. Project Imran was placed in KPK, Punjab as well as in the Centre.

According to the last available reports, the military has decided to refrain from political engineering but no action would be taken against those who had been defying the constitution of 1973 till February 2021—the date former COAS cited as the last month military had been manipulating political moves. I believe the military should focus on the rehabilitation of its reputation which is possible only through action not only resolve that it would refrain from playing as the third team in political arenas. 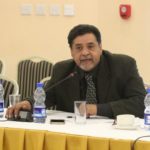 Note: This article was originally published in Daily Pakistan Today. Writer Agha Iqrar Haroon is an international award-winning journalist who has been in the field since 1988 and appears in national and international media as an analyst and political scientist. He can be reached at agha.iqrar@gmail.com