The Forum was jointly organized by the Pakistan-China Institute (PCI) and the China Economic Net (CEN) in cooperation with the Embassy of the People’s Republic of China in Pakistan.

It is conducted as an annual event in Beijing and Islamabad in alternate years.

The Forum conducted in-depth exchanges and discussions on topics including the opportunities for digital media, media as an engine for the high-quality development of CPEC, and China-Pakistan media cooperation.

It was moderated by anchor of China Economic Net Zoon Ahmed Khan.

The Chairman Senate of Pakistan Muhammad Sadiq Sanjrani was the Chief Guest.

The President and Editor-in-Chief of Economic Daily Zheng Qingdong and the Executive Director at the Pakistan-China Institute (PCI) Mustafa Hyder Sayed gave the welcome addresses.

Zheng Qingdong highlighted the importance of the CPEC media forum and said that since its launch, it has contributed a lot towards building a positive public opinion on CPEC.

Zheng said that in the face of the complex international environment, the media of China and Pakistan should take joint actions and form synergies in firmly opposing the negative propaganda against CPEC.

Moreover, he said that the year 2021 will be the 70th anniversary of Pak-China diplomatic relations which will be celebrated with zeal and zest in both Countries.

Mustafa Hyder Sayed said that Pakistan-China Institute in collaboration with China Economic Net launched the CPEC media forum as an online event and it is held in Beijing and Islamabad in alternate years. Last year, Pakistan-China Institute launched the Rapid Response Information Network (RRIN) which identifies fake news on CPEC and deconstructs them with Facts. Moreover, PCI has also launched a monograph titled “CPEC: Facts Vs Fiction”.

Mustafa informed the audience that the Pakistan-China Institute will be publishing “The Governance of China”, Part 2 and Part 3 in Urdu, which are authored by President Xi Jinping. 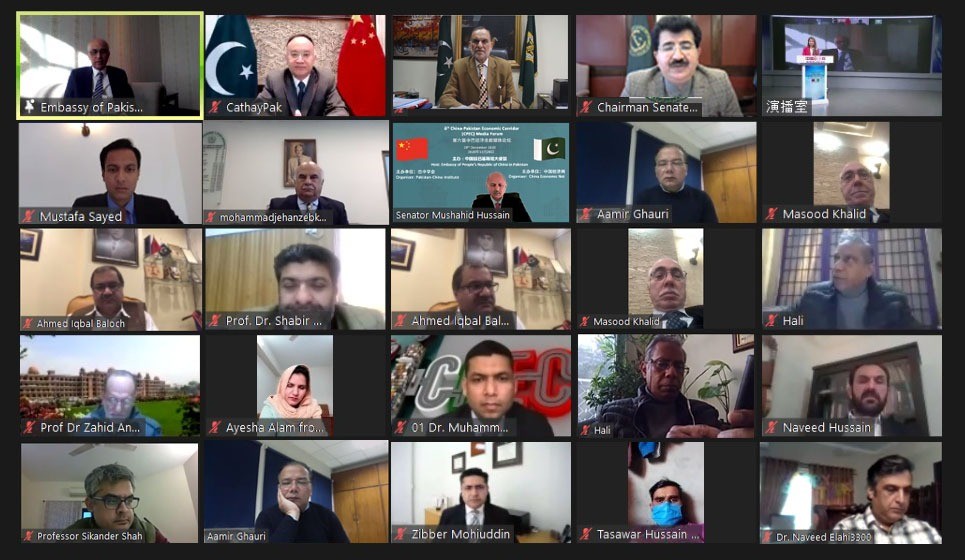 In his keynote speech, the Chairman Senate Sadiq Sanjrani said that China-Pakistan Economic Corridor (CPEC) has achieved significant milestones through joint efforts of the governments, enterprises, and peoples of both Countries. The first phase of CPEC, which focused on energy and infrastructure projects met its successful completion and now, the second phase is set to boost Pak-China cooperation in agriculture and initiate an era of industrialization through the establishment of Special Economic Zones (SEZs).

Sadiq Sanjrani commended the role of the media and said that it has played a very important role in the dissemination of facts on CPEC which has resulted in CPEC becoming a household name in Pakistan. Through events like the CPEC Media Forum, both Countries get an excellent opportunity to consolidate the existing all-weather friendship. He also highlighted Pakistan’s Medical and moral support to China during its fight against the pandemic.

Moreover, he said that the Senate passed a resolution that acknowledged China’s robust measures to deal with coronavirus and commended their efforts to make Pakistani there, mainly students in Wuhan, feel at home during this critical time. It is evident from the documentary “CPEC Cooperation during COVID-19” made by PCI, that CPEC remained resilient even during a global pandemic and progressed ahead.

As China-Pakistan cooperation proceeds to a greater depth, the Senate of Pakistan shall play a greater role in extending all possible cooperation to the media of both Countries to develop greater understanding and cooperation on the issues of common interests.

The 10th JCC on CPEC will be held soon, he announced.

Nong Rong said that high level and quality participation in the CPEC Media Forum is the testimony to the fact that CPEC has been highly valued in Pakistan. Since its inception in 2015, CPEC Media Forum has brought together the governments, business communities, media, think tanks, and other sectors of China and Pakistan to focus on the construction of the CPEC.

While commenting on a recently held meeting of the Joint Working Group on international coordination on CPEC, he said that China would strengthen coordination with academia and think-tanks through CPEC. Since its launch, Pakistan has achieved fruitful results of CPEC cooperation. After the successful completion of CPEC Phase 1, which focused on energy and infrastructure, the second phase would focus on industrial cooperation, agriculture, science, technology, and improving the livelihoods of people.

Moreover, he highlighted the prospects of CPFTA-II and said that it would solve the issue of the trade imbalance between Pakistan and China.

Pakistan’s Ambassador to China Moin ul Haq said that in this digital age, the media is playing a pivotal role in bolstering the friendship and solidarity between the peoples of Pakistan and China.

The ambassador said that the media has rightly guided the public about the true significance of the CPEC project, which has resulted in creating a national consensus on CPEC.

Moreover, he said that Pakistan is the biggest proponent of BRI and endorses President Xi’s philosophy of shared future and prosperity. He concluded by saying that Pakistan and China need to strengthen media cooperation by screening more films in China just like ‘Parwaaz hai Junoon”, which was the first Pakistani film screened in China in the last 45 years.

Moin ul Haq said that JWG on International Cooperation was held in Urumqi on December 26 which agreed to broaden CPEC by inviting third country participation.

The Executive Secretary of the All-China Journalists Association Tian Yuhong said that CPEC is a symbol of attachment between Pakistan and China and even a global pandemic like COVID-19 could not stop the progress of projects under its umbrella.

Moreover, he said that in the face of COVID-19, the common enemy of mankind, the media of China and Pakistan help each other with a common mission.

Senator Mushahid Hussain said that not a single Pakistani working on CPEC sites was laid off.

While commenting on the recently held meeting on Joint Working Group on international coordination, he said that there will be an increased focus on media and thinktank collaboration to take CPEC forward. The meeting also welcomed third party participation in CPEC.

Moreover, he highlighted three objectives of conducting the CPEC Media Forum. Firstly, it is aimed to promote and strengthen the all-weather strategic partnership between Pakistan and China. CPEC is part of BRI which is the biggest developmental and diplomatic initiative of the 21st Century. Secondly, it aims to counter the propaganda against CPEC with facts. This type of media cooperation will create synergies and energize both sides to come up with facts needed to shape positive public opinion on CPEC. Thirdly, it aims to highlight CPEC developments to the media and the general public. In this way, the forum is acting as a ‘Force Multiplier’ in taking this friendship forward.

The Deputy Director at the Office of Editor-in-Chief in Xinhua News Agency NI Siyi said that since the launch of CPEC, there has been close cooperation between the media houses of both countries, When Prime Minister Imran Khan visited China in October 2019, INP and Xinhua news signed an agreement to take this cooperation to next level.

Moreover, he said that the media of both Countries need to highlight the importance of the 70th anniversary of Pak-China diplomatic relations in 2021.

Jahanzeb Khan said that CPEC is a multilayered project. In the first phase which ended in 2020, the focus was on improving infrastructure and solving the issue of energy. In the second phase which will end in 2025, processing and manufacturing industries will be developed and efforts will be made to ensure improvement in people’s livelihoods and balancing regional economic development. In the third phase (2025-2030) also called the period of maturity, the indigenous mechanism for sustainable economic growth will be in place and CPEC will be ready to play a leadership role in the region.

The Director at the Department of Urdu in Asian & African Center, China Media Group Zhao Qiao said that the media of both countries fought misinformation regarding Pakistani students in Wuhan during COVID-19 by interviewing them and communicating the true perspective.

Zhao Qiao called for enhanced media ties between two brotherly countries and said that steps should be taken at the governmental level to increase people-to-people exchanges between Pakistan and China.

The Federal Minister for Railways Senator Azam Khan Swati highlighted the importance of the ML-1 project and said that it would transform the socioeconomic fate of Pakistan and the whole region by giving a boost to connectivity.

This project, he said will create employment opportunities for the locals and improve the logistics infrastructure in the Country.

Moreover, he thanked China for standing with Pakistan through thick and thin and said that in the coming days, this cooperation would be diversified and made more comprehensive.

Azam Swati said that ML-1 would cover 80% of Pakistani territory and 78% of the population of Pakistan.

The Director-General (China) at the Ministry of Foreign Affairs in Islamabad Mudassir Tipu termed CPEC as a transformational and consensus-oriented project. He said that COVID-19 cooperation between Pakistan and China has been exemplary.

Moreover, he also called for closer cooperation between the media of both countries.

The Editor of The News Amir Ghauri talked about the ways to respond to CPEC challenges and said that the coverage of this grand project has seen a significant increase since its launch. He briefed the participants about the importance of connectivity as a result of CPEC.

Moreover, he called for upgrading media ties between the two nations.

After the speeches, an award ceremony was held in which seven journalists were conferred with the “CPEC Communication Award”. 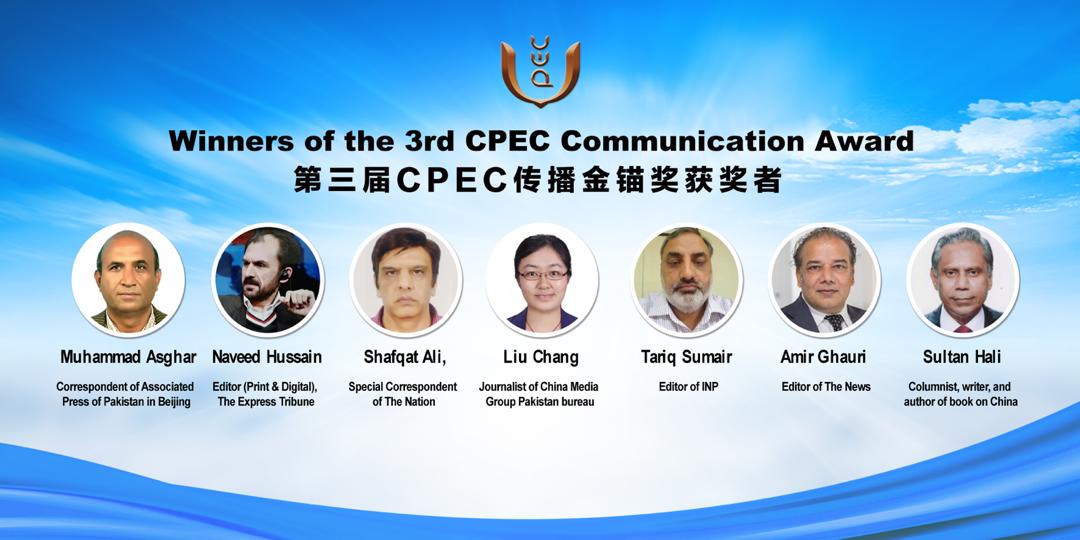 At the end of the Conference, there was a comprehensive question/answer session from the participants, which lasted for over 15 minutes.

The CPEC Media Forum had huge online participation of over 300,000 persons in Pakistan and China including students and scholars, journalists, and academics, policy-makers, think-tanks, and business and opinion leaders.