ISLAMABAD, Pakistan: A total of 63,367 cases of violence against women have been registered in the Country during the last three years, as per the information received from the National Police Bureau.

The detail is as under: 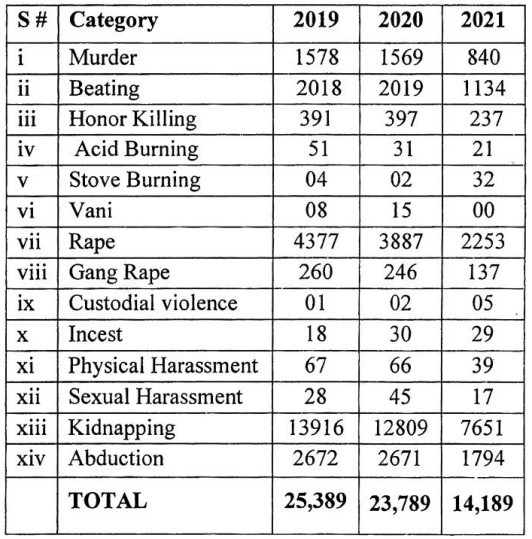 The Minister for Human Rights Mian Riaz Hussain Pirzada told the National Assembly on Wednesday that the human rights violations are reported/ registered with the Federal and Provincial Police Departments in terms of criminal offences.

Accordingly, the action is taken by them against the persons involved in such cases.

In this regard, all the Inspectors General of Police and National Police Bureau were requested to provide the number of cases of violence against women registered in the country during the last three years.

As per information received from the National Police Bureau, the total number of rape/gang rape cases registered in the Country during the last three years, is 11,160.

The detail is as under:

The Minister for Human Rights told that National Assembly that the government of Pakistan is committed to ensure promotion and protection of Women’s Rights as envisaged under the Constitution as well as international commitments by adopting all possible measures.

The basic function of Ministry of Human Rights is to monitor human rights situation/ violations in the Country and to create awareness among the citizens regarding their rights.

Besides the Ministry of Human Rights, the Government of Pakistan has set up a full-fledged National Commission on the Status of Women (NCSW) as a specialized institution for the promotion and protection of the rights of women, in accordance with the law.

The following pro-women laws are being implemented through the relevant Departments across Pakistan including Islamabad: