Coronavirus631 smart lockdowns in place across Pakistan: NCOC
CoronavirusFeatured
By Mati
May 21, 2020 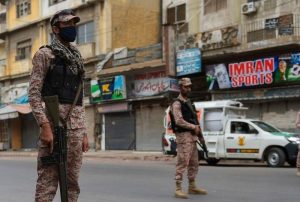 ISLAMABAD, Pakistan: The National Command and Operation Centre (NCOC) on Thursday was apprised that at present around 631 smart lockdowns were in place across the Country whereas the testing capacity had been doubled after the launch of Test, Track and Quarantine (TTQ) strategy.

The Special Assistant to the Prime Minister on Digital Pakistan (SAPM) Tania Ardrius briefed the forum on Decision Support System where the NCOC officials also presented a briefing on the TTQ strategy update.

The Senior Epidemiologist Dr. Rana Safdar presented the Epi Curve Chart and informed that 22 percent health workers were performing duties in the critical care, and 31 percent of the affected had recovered whereas over 1,000 were affected due to coronavirus.

Speaking on the occasion, Asad Umar said that the electoral votes data was the most authentic one to be used for the Decision Support System which was also available electronically with the Election Commission of Pakistan.

The forum was also briefed about the task tracker system that aimed at recording the directions and tasks assigned to various ministries and departments through the NCOC forum.