ISLAMABAD, Pakistan: The Senate was told on Tuesday that 60 percent of complainants have expressed dissatisfaction with the Pakistan Citizen Portal as the mobile app failed to alleviate their grievances despite the fact that record says that 92 percent of total registered complaints were resolved.

Responding to a question asked by the Senator Mirza Muhammad Afridi, the Minister In-charge of the Prime Minister’s Office shared the analytics data of Pakistan Citizen Portal from October 28, 2018 to January 23, 2020 with the Upper House which stated that as of now, a total of 1,434,455 citizens were registered with the app.

In addition, it was also that only 447,788 citizens expressed satisfaction over the resolution of their issues through the app, which constitutes 40 percent of total complainants. 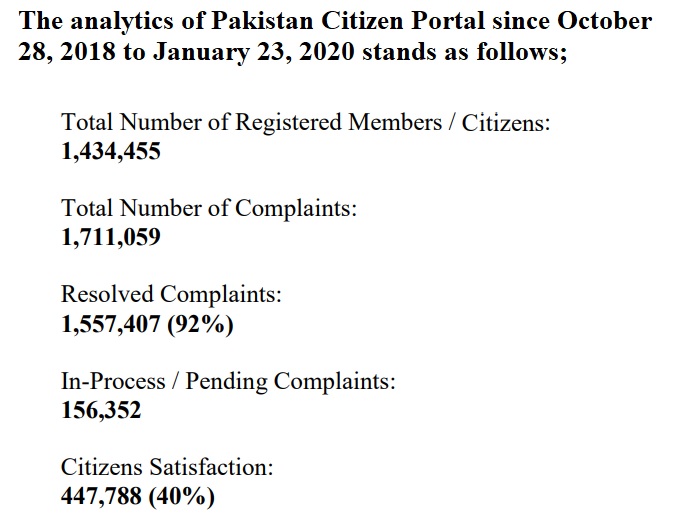 Separately, the Minister for Human Rights Shireen Mazari told the Senate that during the last three years, the Helpline (1099) received a total of 866,010 calls, out of which, 37,618 calls were related to human rights issues.

Mati
Mati-Ullah is the Online Editor For DND. He is the real man to handle the team around the Country and get news from them and provide to you instantly.
Share
Facebook
Twitter
Pinterest
WhatsApp
Previous articleMCC Tour of Pakistan Schedule
Next articlePakistan and Azerbaijan discuss military education cooperation