5 Pakistani Weapons That India Is Afraid Of – Latest Military Equipment

Pakistani Chinese friendship goes a long way. There is no doubt about that. But it goes way deeper than what the arch-rival India thinks of it to be. Pakistani Army, for a long time, has decided to come out of the support of the United States to have its stock of weaponry for the crisis and the support of the country. This is why they took to Chinese suppliers almost two decades ago for the mass production of weapons. Since then, China has been the major supplier of weapons that Pakistani armed forces use to defend the borders. Today we have 5 Pakistani weapons that frighten India and it is doing its best to match Pakistani firepower.

One of the main reasons the Indian army is afraid of Pakistan is that we have a combination of ammunition from Russia, the US, and China. If the military concerns are ever to be raised at that level, Indian knows it won’t be easy for them to take Pakistan head-on.

Let’s take a look at these 5 Pakistani weapons that frighten India: 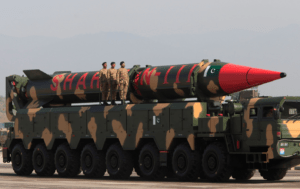 Who doesn’t know Dr? A.Q Khan and the role has played to make Pakistan self-reliant on the nuclear weapons only? Before he successfully launched a nuclear missile, Pakistan was depending on the US for its nuclear weapons. However, the acquisition and the capability to produce nuclear weapons has given Pakistan an edge over the others.

In Pakistan’s Nuclear Weapons Program, China has played a significant role in supporting development. As per resources, China is the one to provide Pakistan with warhead designs, uranium, and missile components. 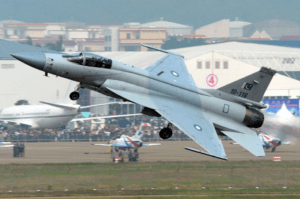 The JF-17 Fighter Jet is the multirole fighter of the Pakistan Air Force. It has replaced the American F-16Cs. It has air-to-ground and air-to-air multiple munitions alongside air-launched cruise missiles. It is a budget aircraft, but it brings modern war technology to the table.

When compared with the Indian counterparts of the US30s, this aircraft is a tough component with its steady range. It is the military production of Pakistan and China, which alarmed India and they set on to create their fighter jet, which has yet to see the light of the day. 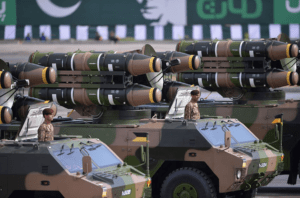 The Pakistani military, previously being dependent on PAF, acquired HQ-16 for its protection. It is used for the defense of the ground formations. It has a vertical launch technique with containerized missiles. 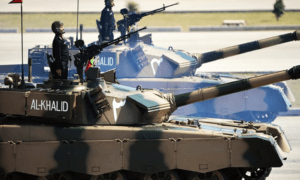 The Al-Khalid Tank or VT-1A is another joint project between China and Pakistan. The new, unique design, panoramic commander’s sight, a 125mm gun, and thermal gunner’s sights all make this tank one of the most capable in the region.

The bulk of the Indian tank forces is comprised of T-72Ms and Al-Khalid Tank can outrun them in the war. 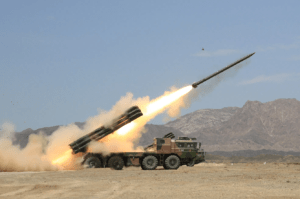 They first arrived in Pakistan in 2008 – the A-100 MRL is one of the deadliest artillery systems on the ground. If they are static, they tend to wipe out entire units on the field. India also has the same launchers from Russia.

These rocket launchers are a key part of the opening strategy of the deterrence conflicts between India and Pakistan.

Dawood Hassan
Dawood Hassan is one of our SEO consultants and lead content managers. His wide range of expertise has helped us grow and provide you with better quality content.
Share
Facebook
Twitter
Pinterest
WhatsApp
Previous article7 die, 13 injured as seminary roof collapses in North Waziristan
Next articlePakistan-Azerbaijan Relations solidified through test of COVID-19 Era