OTTAWA, Canada: As many as 40,000 non-resident Pakistanis have so far opened Roshan Digital Accounts (RDAs) and approximately 1,000 new accounts are being opened on daily basis.

These figures were highlighted by panelists during a well-attended webinar arranged jointly by the High Commission for Pakistan in Ottawa, and the Consulate General of Pakistan in Toronto on the launch of Roshan Digital Accounts for the non-resident Pakistanis.

The High Commissioner for Pakistan to Canada Raza Bashir Tarar welcomed the participants including senior officials from the State Bank of Pakistan (SBP) and other commercial banks while the Consul General Pakistan in Toronto Abdul Hameed moderated the discussion.

A large number of Pakistani expatriates also attended the discussion streamed live on social media and asked keen questions about various aspects of the RDAs.

It was noted in the Webinar that the launch of Roshan Digital Accounts is a great step forward in streamlining and steadying the growth of home remittances which have already risen by 10.10 percent from US$ 9.6 billion in 2010 to US$ 22.50 billion in 2019 with the figure touching an impressive US$ 23.12 billion mark in FY 2020. 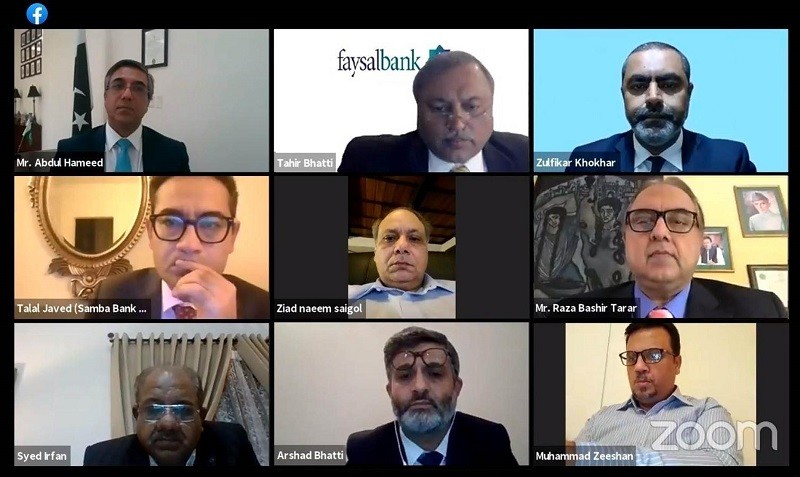 It was noted that steady growth in home remittances reflects on the scale of the commendable contribution made by the Pakistani diaspora to the socio-economic development and prosperity of their Country.

Importantly, Pakistan’s performance in getting home remittances in the last 10 years is better than other regional countries such as the Philippines, Bangladesh, Sri Lanka, and India which recorded a growth of 5.60 percent, 6.40 percent, 6.00 percent, and 5.30 percent respectively as compared to 10.10 percent growth recorded by Pakistan during the same period.

The Managing Director of the Deposit Protection Corporation of Pakistan under the Central Bank of Pakistan Syed Irfan Ali lauded the role of overseas Pakistanis in the socio-economic development of Pakistan by referring to the US$ 23.12 billion home remittances sent by them last year.

Syed Irfan Ali said that these remittances played a huge role in plugging the trade gap of US$ 23.18 billion in the exports and imports which stood at US$ 21.39 billion and US$ 44.57 billion respectively during the last financial year.

Irfan Ali said that the launch of RDAs was meant to facilitate the non-resident Pakistanis in linking up with the financial sector in Pakistan through a secure, presence-less, and hassle-free manner to engage in a broad range of investment and business opportunities.

The Managing Director said that the Pakistani diaspora had already welcomed the initiative as indicated by some 40,000 RDAs that had been opened by them so far while approximately 1,000 new accounts were being added to the number every day.

The Director of Exchange Policy Department in the State Bank of Pakistan Arshad Bhatti gave a detailed presentation on the operational details and purpose of RDAs in diversifying non-traditional remittances corridors for non-resident Pakistanis through faster, cheaper, accessible, and transparent remittances with the help of the latest digital platforms.

Arshad Bhatti said that the RDAs offered the non-resident Pakistanis an easy and secure route to engage in various business activities, including renting, selling and buying of property, investment in stocks as well as in Naya Pakistan certificates apart from other routine business transactions.

The Director of Exchange Policy Department said that eight Pakistan banks were offering the facility of RDAs and more banks would be added to the loop in the coming days.

Mati
Mati-Ullah is the Online Editor For DND. He is the real man to handle the team around the Country and get news from them and provide to you instantly.
Share
Facebook
Twitter
Pinterest
WhatsApp
Previous articleDownload Music To Hear Without Internet On Your iPhone Easily!
Next articleDG Health praises DHO South Waziristan for making functional closed health facilities