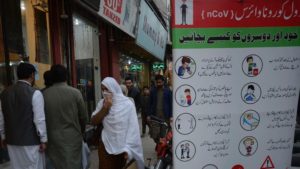 ISLAMABAD, Pakistan: In order to ensure public safety amid a surge in new Coronavirus Cases, administrative actions for the implementation and enforcement of the standard operating procedure (SOPs) formed by the government has been taken all across Country, according to the National Command and Operation Centre (NCOC).

Reports received from Provisional Officials during the last 24 hours indicated that administrative action has been initiated against the violators of the SOPs and social distancing in public places and high-risk areas of markets, public transport and industrial sectors as follows;

294 SOP violations have been observed in Balochistan due to which 128 shops and 57 transports/vehicles were temporarily closed/fined and cautioned.

Special teams were made for checking various markets, bazaars/transport & industrial areas across Punjab.

792 shops, 4 industries, 610 transports were closed/fined/cautioned all across the province on 2,593 SOP violations.

Strict actions including the closing of shops and transport have been taken against SOP violators all across Sindh.

In Khyber Pakhtunkhwa, 406 SOP violations were observed in which 2 shops and 22 transports were cautioned and sealed while 1,241 individuals were fined.

43 shops and 47 transport were fined/sealed on 153 violations of health guidelines/instructions in Gilgit-Baltistan.

44 SOPs violations were marked in the ICT.

In AJK, 379 SOPs violations were observed during which 55 shops and 87 transports were fined/sealed.