ISLAMABAD, Pakistan: The Senate has been informed that a total of 350,447 Cases are pending in the Supreme Court of Pakistan, Islamabad High Court (IHC) and four Provincial High Courts.

In a written reply to a question by National Party’s (NP) Senator Mir Kabeer Ahmed Muhammad Shahi, the Minister for Law and Justice Dr. Muhammad Farogh Naseem told that Upper House on Friday that as on October 15, 2018, 350,447 Cases were pending in the Supreme Court and five High Courts.

Farogh Naseem told that as the judiciary is an independent institution so no information regarding the current number of Cases pending in the Supreme Court and the High Courts is available in this Ministry.

However, the minister told that, a letter was sent to Courts’ Registrars to seek the required information.

The requisite information received from Law and Justice Commission of Pakistan is as under:— 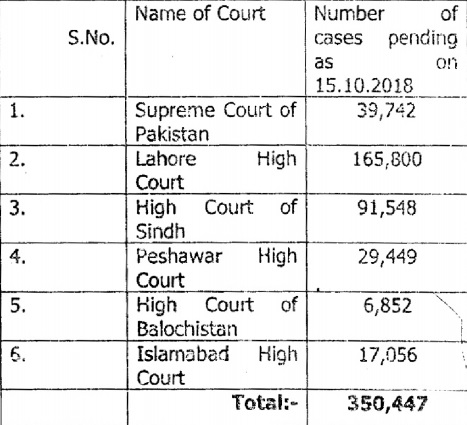 Mati
Mati-Ullah is the Online Editor For DND. He is the real man to handle the team around the Country and get news from them and provide to you instantly.
Share
Facebook
Twitter
Pinterest
WhatsApp
Previous article‘HUAWEI WATCH GT’ set to be available in Pakistan for Rs 29,999
Next articleSchedule of HBL PSL 2019