ISLAMABAD, Pakistan: The Federal Minister for Planning, Development, and Special Initiatives Asad Umar presided over a meeting of the National Command and Operation Center (NCOC) in Islamabad on Tuesday, in which it was informed that 3,497 Smart Lockdowns have been imposed in 103 districts across the Country.

The meeting was informed that 52 percent COVID-19 tests are being done due to the proactive strategy of Trace, Test and Quarantine (TTQ).

The Chief Secretary Sindh informed the NCOC meeting that they are monitoring Education and Marriage Halls to ensure compliance of health guidelines.

The Chief Secretary Khyber Pakhtunkhwa said that the provincial government has taken administrative measures against certain Restaurants and Marriage Halls for violations of COVID-19 protocols.

The Chief Secretary Balochistan said that there is an improvement in the COVID-19 situation in the province due to the implementation of the TTQ strategy. 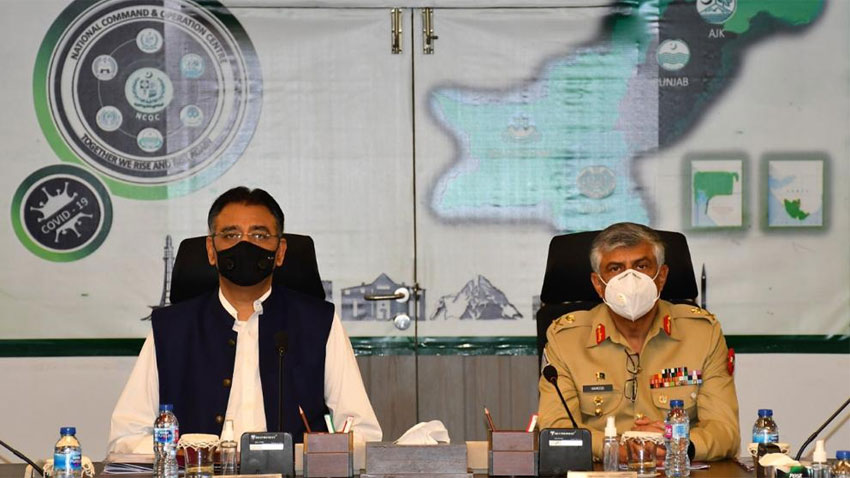 In his remarks at the meeting, Asad Umar emphasized the need for compliance of Standard Operating Procedures (SOPs) including the use of face masks to avoid the spread of COVID-19. He said that the risk mitigation is important to check the second wave of Coronavirus in the Country.

Asad Umar said that we as a nation and all stakeholders have taken rights steps which helped us in saving lives and contain disease spread. He said that the people’s proactive response has been the key in our success against COVID-19.

The federal minister said that the people of Pakistan have shown great responsibility to not only protect themselves but following guidelines they have ensured the safety and well-being of others.

The minister paid great tributes to media for their effective messaging for behavior change and help in reaching out to the masses. He said that the people and the media are two important pillars which made the entire effort a success.

Mati
Mati-Ullah is the Online Editor For DND. He is the real man to handle the team around the Country and get news from them and provide to you instantly.
Share
Facebook
Twitter
Pinterest
WhatsApp
Previous article
Int’l Day for Disaster Risk Reduction: Pakistan stresses enhanced efforts to mitigate disaster risks
Next article
Sanam Saeed- Top 10 Bold and Beautiful Pictures to Leave You Stunned!
Share
Facebook
Twitter
Pinterest
WhatsApp