ISLAMABAD, Pakistan: The Vice Chancellors of Public Sector Universities have shown serious concerns and strong dismay over drastic cut in the higher education budget for the Fiscal Year 2022-23, expressing apprehension that the cut would make it impossible for Universities to pay salaries and pensions let alone meeting the overall expenses needed to run a University.

The Ministry of Finance has communicated IBC (Indicative Budget Ceilings) of only Rs 30 billion for higher education’s recurring grant against the rationalized demand of Rs 104.983 billion. The allocation is 45 percent less even than the current year’s allocation (FY 2021-22) that was Rs 66.25 billion.

Over 120 heads of Public Sector Universities, who attended a virtual meeting from across the Country on Thursday, were unanimous in lamenting the government’s decision for the unprecedented cut in the Universities’ budget and urged Prime Minister Shahbaz Sharif, the Finance Minister Miftah Ismail and the Minister for Education Rana Tanveer to urgently look into the matter and enhance the budget as per rationalized demand, to avoid subversion of long-term socio-economic goals of the Country, and save the higher education sector from total chaos and collapse.

They said that the rationalized demand was submitted following a rigorous review and assessment process of the requirement of 100 existing Universities, 49 Research Centres/Institutes and 18 new Universities (eligible for funding) by a Joint Assessment Committee of the Higher Education Commission (HEC) and the Ministry of Finance. 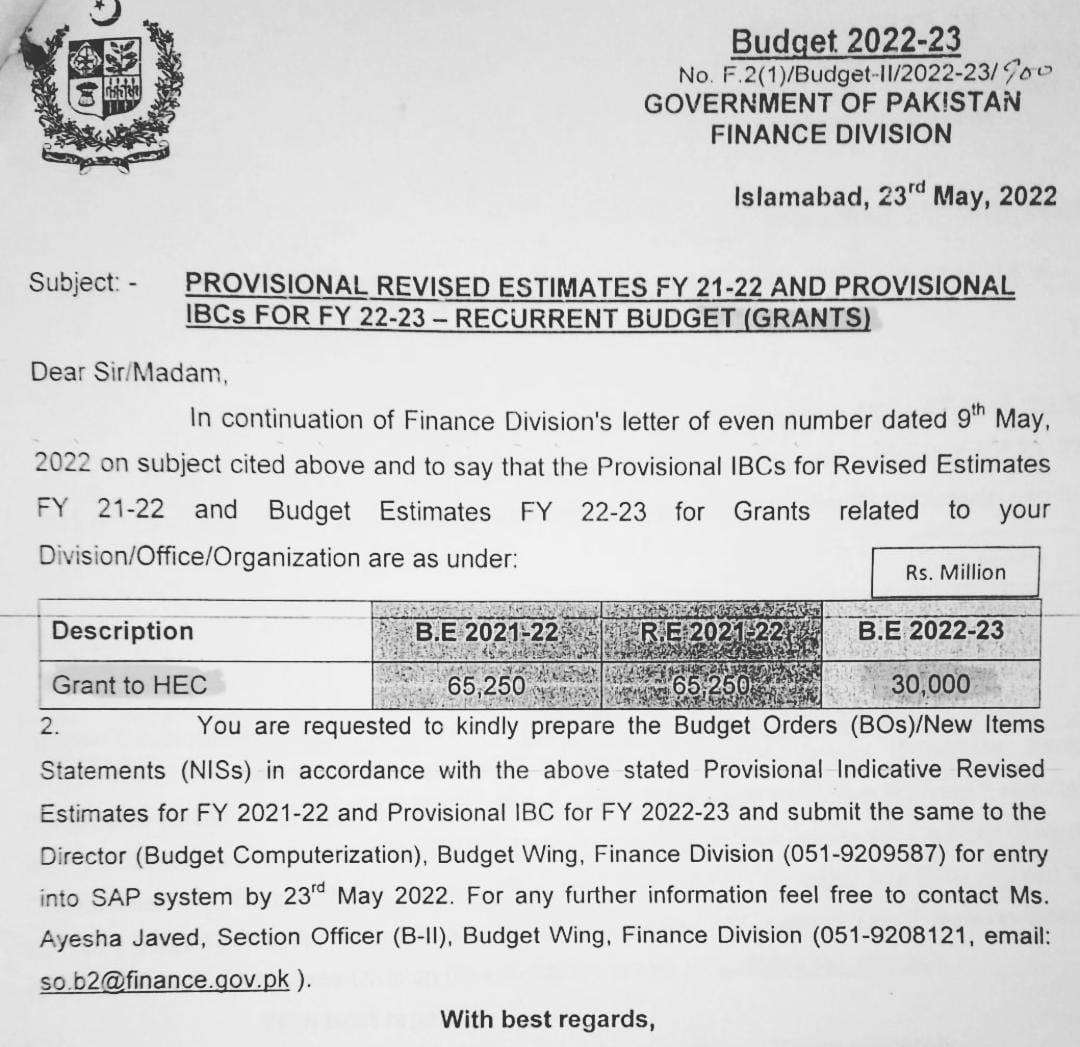 The Vice Chancellors stressed that the Pakistani Universities are already under enormous financial pressure because of stagnant funding during the last five years. The COVID-19 pandemic in 2020-21 and 2021-22 has further exacerbated the financial stress by increasing the cost and reducing fee inflows.

They said that the Public Universities would be left with no other alternate but to increase the student fee drastically, enhance student intake beyond capacities, adding that these repercussions will lead the sector to disaster and severely dent the quality of learning and graduates.

The university heads stressed that if CFY additional grant of Rs 15 billion committed by the government last year is not provided, funding cut is not reversed, and budget for FY 2022-23 is not allocated as per the demand, Universities will not be able to survive.

While addressing the meeting, the Chairman HEC Tariq Banuri emphasized, “it must be realized that education is as much important as the country’s defense and security.” He expressed his apprehension that the budget cut, if materialized, would land the higher education sector in a severe crisis. He stressed the need for collectively and clearly making out a case to the government about the loss and consequences of unprecedented reduction in higher education funding.

The Executive Director HEC Dr. Shaista Sohail underlined the challenges of the higher education sector, especially in the face of the proposed budgetary cut. She regretted that the recurring grant allocated to HEC since FY 2017-18 has almost been stagnant and its share as percentage of GDP kept on declining to the level of 0.14% in the current fiscal year.

Dr. Shaista Sohail highlighted that the higher education sector has witnessed a tremendous growth during last five years through the establishment of number of new universities/HEIs by the federal/provincial governments while the students’ enrolment has also remarkably increased.

Mati
Mati-Ullah is the Online Editor For DND. He is the real man to handle the team around the Country and get news from them and provide to you instantly.
Share
Facebook
Twitter
Pinterest
WhatsApp
Previous articlePakistan Navy always ready to tackle maritime security challenges: Naval Chief
Next articlePakistan, Azerbaijan sign MoU on cooperation in Labour, Employment & Social Protection fields