20-point agreement reached for religious practices at mosques during Ramazan

ISLAMABAD, Pakistan: President Dr. Arif Alvi and Religious Scholars (Ulema) on Saturday reached a 20-point agreement with regards to religious practices in mosques during the upcoming holy month of Ramazan, according to which, conditions have been set to ensure the precautionary measures at mosques to curtail the impact of Coronavirus (COVID-19).

As per the understanding, no carpets will be laid in mosques and Imam Bargahs and that the prayers will be offered on the floor with a distance of six feet between the people offering prayers. 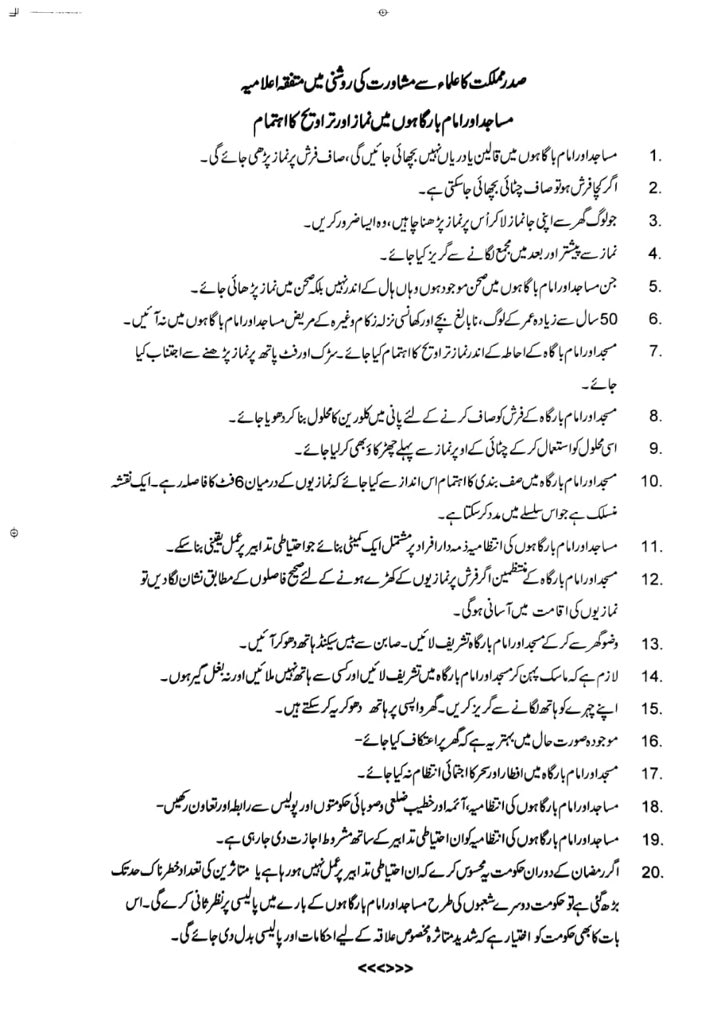 In the current circumstances, the people have been advised to make ablution at home and wash hands for 20 seconds with soap before leaving for the mosque with masks on their faces.

They have also been asked to observe social distancing and refrain from any sort of gathering after the prayers.

There will be no gatherings for Iftar and Sehr in mosques during Ramazan.

It was decided the floor of the mosques will be washed with chlorine added water.

For Namaz-e-Taraweeh, it was decided that it will be offered within the premises of the mosques and not on the roads and footpaths. Taraweeh can also be arranged at home.

It was also agreed that mosque courtyards will be used for prayers instead of halls.

The children and people above the age of 50 as well as those suffering from any disease including flu, fever and cough will not come to the mosques for prayers.

It was also recommended that people observe Aitekaf at homes.

The administration of mosques will also establish committees in order to ensure the implementation of these precautionary measures.

The mosques’ administrations and Imams will also stay in touch with the district and provincial authorities and fully cooperate with them.

The government will have the option of reviewing today’s recommendations during Ramazan if it was felt that the precautionary measures are not being adhered to or that the number of Coronavirus affected people has risen sharply.

Mati
Mati-Ullah is the Online Editor For DND. He is the real man to handle the team around the Country and get news from them and provide to you instantly.
Share
Facebook
Twitter
Pinterest
WhatsApp
Previous articleUHS, SZABMU & PIMS join hands to combat Coronavirus
Next articleMedia Under Fire in India