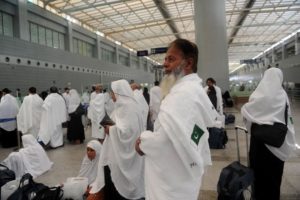 ISLAMABAD, Pakistan: As many as 184,210 Pakistanis would perform Hajj next year in Saudi Arabia following a 5,000-pilgrim increase in the Country’s Hajj quota.

Meanwhile according to the Official Sources in the Ministry of Religious Affairs and Interfaith Harmony, the Hajj Policy 2019 will be announced in the second week of January 2019.

The Official Sources said that the draft of Hajj Policy 2019 is being finalized after consultations with all stakeholders.

They said that the applications in the government hajj scheme will be invited from the general public by last week of January 2019.

Last year, out of the total Hajj quota of 179,210, 119,473 were allocated to government hajj scheme which provides an economical package with reasonable facilities for the pilgrims while 59,737 were allocated to the private scheme i.e. Hajj Group Organizers (HGOs).

Following previous practices, there would again be two schemes in 2019 i.e. “government hajj scheme” for those applicants who intend to perform hajj under government arrangements and “private hajj scheme” for those who want to make their Hajj arrangements through HGOs, in accordance with service provider agreement between the ministry and HGOs and individual agreement of the intending Haji with the HGO.

Mati
Mati-Ullah is the Online Editor For DND. He is the real man to handle the team around the Country and get news from them and provide to you instantly.
Share
Facebook
Twitter
Pinterest
WhatsApp
Previous articlePakistan, Russian FMs mull Afghan peace process
Next articleMinistry of Planning clarifies a news article on CPEC debt