ISLAMABAD, Pakistan: The National Assembly has been told that currently, 18 prisoners are confined in the jails of Khyber Pakhtunkhwa, who are suffering from HIV Aids.

In a written reply to a question asked by Pakistan People’s Party’s (PPP) lawmaker in the House Shazia Marri, the Minister for Interior Ijaz Ahmad Shah told that six HIV Aids prisoners are incarcerated in Central Prison Peshawar, two each in Central Prison Bannu and Central Prison Mardan, and one in District Jail Timergara.

In addition, three prisoners are confined in District Jail Abbottabad and four in Judicial Lockup Swabi. 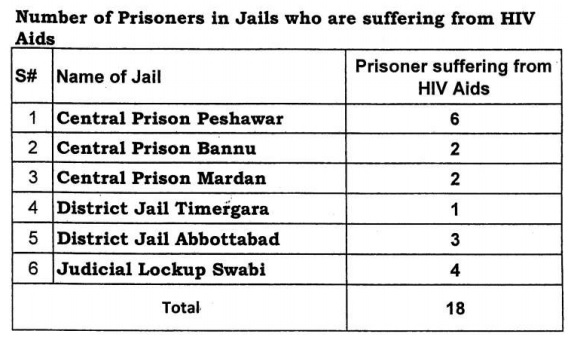 Ijaz Ahmad Shah also told that there is no regular program/ feature of screening of prisoners for HIV/AIDs in Jails.

To another question by Mohsin Dawar, the Minister for Interior told that 461 persons have been placed on Exit Control List (ECL) by the present government.

The minister said that six Members of National Assembly (MNAs) were also placed on ECL with the approval of the Federal Cabinet; however, the names of 3 MNAs were removed from ECL.

Mati
Mati-Ullah is the Online Editor For DND. He is the real man to handle the team around the Country and get news from them and provide to you instantly.
Share
Facebook
Twitter
Pinterest
WhatsApp
Previous articleHow to obtain domicile of Islamabad
Next articleQureshi Holds Luncheon Meeting with Japan-Pakistan Business Cooperation Committee