KYIV, Ukraine: So far a total of 1,435 Pakistanis have been evacuated from Ukraine after the Russian troops invaded the Country on February 24, causing a lot of casualties and losses on both sides.

The figures released by the Embassy of Pakistan in Ukraine on Thursday shown that 1,262 Pakistanis have been evacuated from Ukraine into Poland, 124 into Romania, 12 into Hungary, 21 into Pakistan, and 09 each into Slovakia and Moldova.

The Embassy said that 20 Pakistanis are on the way to the Ukrainian border while around 40 people still remains to be in Kyiv, Kharkiv, Mariupol, Sumy, and Kherson Cities of the war-hit Ukraine. 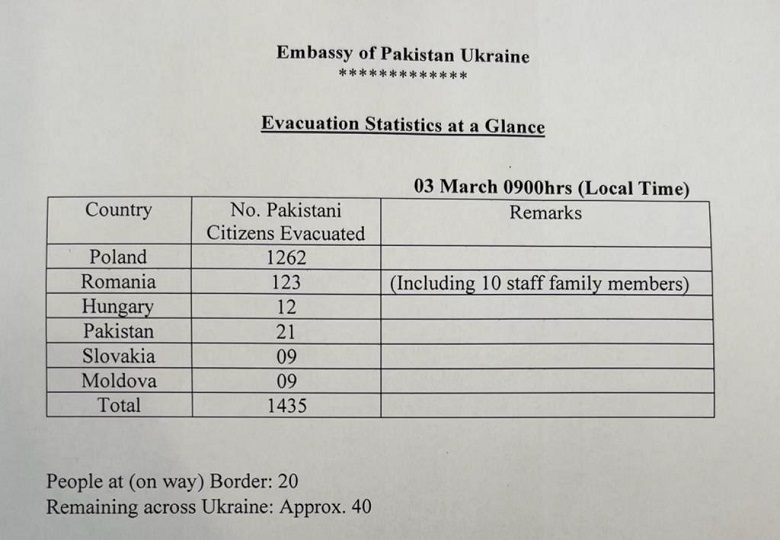 The Embassy said that 06 Pakistanis are on way to the Ukraine-Hungary border, 02 are on the way to Poland border whereas 12 Pakistani students stuck in Chernihiv region (area controlled by Russian forces) have reached Lviv and soon they will be evacuated from Ukraine.

Furthermore, it said that three Pakistani students namely Hira Imran (Passport No. EQ1224632), Shamza Khan (Passport No. GY4159791), and Sumera Akram (Passport No. AN1329743) are currently in Ivano-Fankivsk, and they do not want to leave Ukraine and want to stay at their own risk despite repeated advice of the Mission.

The Embassy said that it is making all possible efforts to evacuate all remaining Pakistani nationals from Ukraine at the earliest.

The Mission has established following different focal points for facilitation and evacuation of Pakistani citizens from Ukraine. Due to bad network and internet issues, numbers given are not easily accessible.

All those making calls, may keep trying if any number is not accessible at a given time: