It’s been just nearly a month since “Pakistan Citizens’ Portal” was launched enabling Citizens to have a direct access to the government via a mobile App, 4,54,994 people have registered themselves in it while a total of 101,171 Complaints have so far been lodged.

Its members include people from all walks of life including students, journalists, social workers and those affiliated with private business and corporate sector.

As per the date unveiled on November 24, progress on 84,399 Complaints lodged by Citizens via ‘Pakistan Citizens’ Portal’ is in process while 16,770 Complaints have been resolved.

In addition, a total of 21,174 Suggestions have so far been put forward by Citizens. 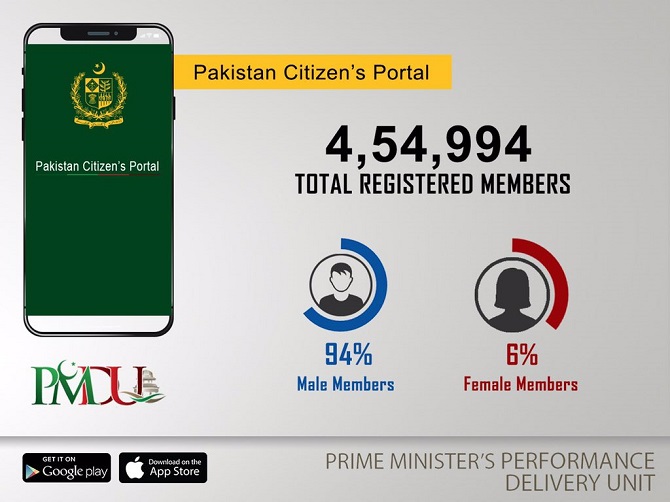 The date revealed by Prime Minister’s Delivery Unit (PMDU) says that by November 24, 9,505 Complaints were lodged in Energy & Power Sector and out of them, 6,603 were resolved.

In Health Sector (which includes Primary Health, Secondary Health, Illegal Medicines/Quacks, etc.), 6,679 Complaints were lodged and out of them, 1,374 were resolved.

In Land & Revenue Department, 6,202 Complaints were lodged and out of them, 880 were resolved.

Similarly, 6,200 Complaints were lodged in Human Rights Violations (Which includes Missing Person, Child Abuse, Denial of Rights, etc.), and out of them, 637 were resolved.

Complaints being registered at Citizen Portal are seriously followed through for resolution. https://t.co/f6E4zaO5Gi

In the App, Overseas Pakistanis have also registered in large to record their grievances. They lodged 4,827 Complaints by November 24, out of them 264 were resolved.

Mati
Mati-Ullah is the Online Editor For DND. He is the real man to handle the team around the Country and get news from them and provide to you instantly.
Share
Facebook
Twitter
Pinterest
WhatsApp
Previous articleA Journey through Western Ukraine: Social fabrics of Ukraine link traditional subcontinental society
Next articlePM Imran Khan, Army Chief reach Miran Shah