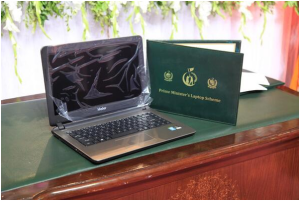 Through this initiative, laptops will be distributed among students from different universities and colleges across Pakistan.

Shaza Fatima further narrated that the Youth Business Loan Scheme has been revamped and through the Skills Development Programme, 100,000 youth will be equipped with skills.

In a meeting with various journalists, the special assistant said that the Prime Minister’s Youth Programme was initiated in 2013 with the goal of empowering our young population.

Shaza Fatima told media persons that merit will be upheld in the laptop scheme. A special quota has been reserved for the students from Balochistan, and the number of laptops to be distributed there have been doubled. Additionally, 50 percent quota has been specified for women in laptop scheme.

Shaza Fatima denied all the rumours about the suspension of the Youth Business Loan Scheme and said that the initiative has gone through some structural changes. Loans up to Rs 500,000 are now interest free and to ease the loan process, the conditions for getting loans up to 7.5 million have been changed.

The special assistant said that almost two million students graduate from different educational institutions every year and there is a big need of providing them with market-oriented education. Under Prime Minister’s Youth Programme, a national employment policy is being created.

The special assistant further said that the last government closed National Internship Programme. Technological transformation is one of our main focuses, tech trainings and digital skills scholarships will be given to students, she said.

Shaza Fatima Khawaja informed journalists that a task force has been established and the government is aiming towards raising IT Exports to US$ 15 million. She highlighted that Youth Skills day is being celebrated today all across the globe.

The special assistant stressed upon the importance of Skills training. She said that more than 50 million population of Pakistan is between the age of 15-25 years and our utmost goal is to train and equip them with skills.